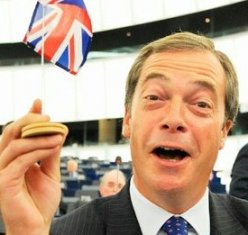 The far-right has been highly successful in claiming high-voter numbers in both the UK and France.

Voters in those countries turned their backs on mainstream politics in favour of UK Independence Party leader Nigel Farage and Marine Le Pen of France.

His eurosceptic UKIP party has made UK history, topping the polls with the anti-establishment messages that the UK should exit the European Union and intra-EU immigration should be limited.

The results have put the Conservatives of Prime Minister David Cameron third with 19 seats, behind main opposition Labour Party on twenty. The Green Party ended up with 3 seats.

The Scottish National Party came in at fifth place with two MEPs while Nick Clegg's Liberal Democrats shed 10 of its 11 MEPs, and being shunted back to sixth place.

Nigel Farage celebrated his victory by saying the result would bring fundamental change to British politics.

He told London's Daily Telegraph: "The political establishment will be terrified by this. They will all have to do a very large amount of soul searching and realise that the usual platitude 'We're listening' isn't enough."

On the other side of the Channel, the far-right National Front won the largest number of votes.

The leader of the party, Marine Le Pen, campaigned on limiting the power of the European Parliament, which she has referred to as a "crazy machine."

To get her message across Le Pen forged alliances with other eurosceptics in Austria and the Netherlands.

Le Pen, 45, has said she will concentrate on a return to French sovereignty and the whittling down of European Union power.

On Sunday she told reporters: "We don't want a further enlargement of the bloc."

Marine is the daughter of Jean Marie Le Pen, who began the National Front party as a racist movement.

She has expanded her electoral base by avoiding the kind of racist comments that were once attributed to her father.

UKIP's Deputy Leader Paul Nuttall on Monday ruled out any prospect of his party working with Le Pen's National Front, which leader Nigel Farage has been critical of for what he describes as "antisemitism and general prejudice."