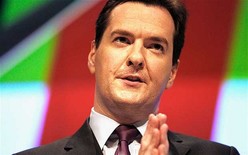 LONDON - Chancellor George Osborne Wednesday announced a new initiative to explore the potential role of crypto-currencies to foster financial innovation and establish the UK as a market leader in the FinTech sector.

Speaking at the launch of Innovate Finance, formerly FinTech UK, a group that promotes the interests of the UK FinTech industry, Osborne said he has commissioned the Treasury to produce a programme of work on crypto-currencies, examining their potential risks and benefits for using digital currencies, such as Bitcoin, to better access finance for small businesses.

The report, scheduled to be published in the Autumn, could pave the way toward a new regulatory framework for crypto-currencies in a bid to boost the UK's Financial Technology (FinTech) sector.

Underling that "the world of finance as we know it is changing in front of our eyes", the Chancellor said, "I can today announce that the Government will start a major programme of work exploring the potential of virtual currencies and digital money.

'These alternative payment systems are popular because they are quick, cheap, and convenient and I want to see whether we can make more use of them for the benefit of the UK economy and British consumers."

Exploring the potential for the use of digital currencies such as Bitcoin and better access to finance for small businesses were among measures announced by the Chancellor .

Aides to the Chancellor stressed that the objective is to regulate virtual currencies like Bitcoin to make it easier and safer for people to use, rather than to drive it out of Britain.

The review will "look into whether regulation of the sector is required, so that virtual currency business can continue to set up in the UK, and for people and businesses to use them safely," Osborne said.

"The key to the Government's long term economic plan is cementing Britain's position as the centre of global finance. That's why I'm delighted to announce a series of major steps today to help our FinTech firms continue to grow and succeed."

Osborne's pronouncement follows HMRC's decision in March to scrap VAT on Bitcoin, believing it to be a barrier to international trade. The Financial Conduct Authority (FCA) has however been reluctant to issue any guidance on how crypto-currencies might be regulated.

Unlike traditional currencies like the pound or dollar, virtual currencies like Bitcoin exists outside the control of any central banks or laws. It is entirely trade online, often anonymously, leading to its association with the internet drugs market. A highly volatile currency its value has risen from just 8 pounds 18 months ago to more than 645 pounds late last year. It is currently trading at 352 pounds.

Despite no government having accorded it as a legal currency, the virtual currency is gaining credence as a viable alternative for the costly wire transfers of an estimated 350 billion pounds in remittances to families in the developing world.

The Treasury estimates that Britain's alternative finance market is worth 1.6 billion pounds currently.

Business Secretary Vince Cable said: "Forcing banks to refer businesses to alternative lenders is something I've been determined to make happen. It's good that more SMEs are making use of alternative finance but the big banks still dominate and small businesses often give up if they're turned down for finance by their bank.

"The UK needs a diverse and competitive business finance market like Germany and the US if our SMEs are to thrive, and that is why the Business Bank is so important."

As part of the other measures new rules will force banks that reject loans for small and medium-sized enterprises (SMEs) to ask the firms whether they want to be referred to alternative lenders, including crowd-funders, peer-to-peer lenders and invoice financiers.

Other measures announced included a consultation on digital communications, a review of the part technology will play in the future of the FinTech sector, a 100 million pound extension to investment for smaller businesses, a push to promote Britain in overseas markets and awards for those who come up with solutions to help small businesses access finance.