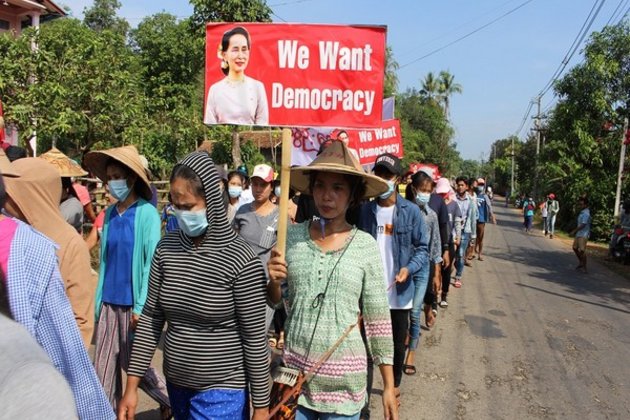 Naypyitaw [Myanmar], April 16 (ANI): A top leader of the anti-coup protest movement in Myanmar was arrested by security forces Thursday as he led a procession.

According to The Hill, Win Zaw Khiang, a member of a protest organizing group, confirmed that Wai Moe Naing was arrested. Khiang posted a video on his Facebook page that he says shows Naing's motorbike being hit by an unmarked police car, after which he said Naing was taken into custody.

The detention marks the latest attempt by the military junta to clamp down on protests against its February 1 coup that ousted the civilian government.

According to the Assistance Association for Political Prisoners, over 3,000 people have been arrested and 715 protesters have been killed since the takeover.

The Hill reported that Naing, 25, is among the more prominent leaders of the demonstrations against the junta. While protests have continued since early February, they have made little progress in the campaign's effort to return Myanmar, also known as Burma, to civilian rule.

Civil rights advocates expressed alarm at Naing's detention. "Please help to save his life. He is a charismatic leader that leading Moneywa city uprising," tweeted Kyaw Win, the founder of the Burma Human Rights Network, referring to the city in which leading demonstrations.

"The arrest of prominent protest leader Wai Moe Naing in Myanmar is a blatant attempt to silence dissent. The courage of peaceful protesters like Wai has inspired the world. He and over 3000 others arbitrarily arrested must be immediately released," added Amnesty International, in a tweet as quoted by The Hill. (ANI)