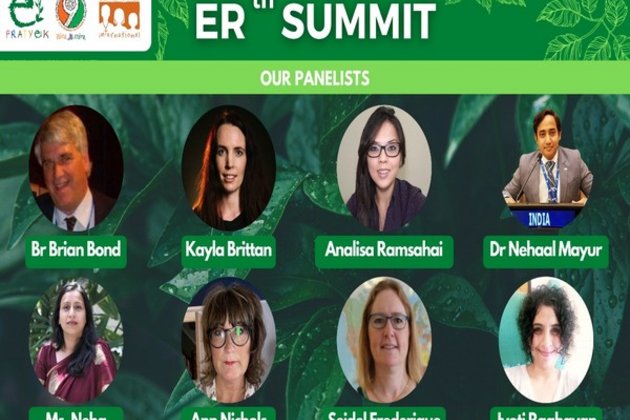 The summit concluded by marking ideas that were related to the civil, political, economic rights of children in relation to climate change and the earth as a whole. Ms Deirdre Boyd, United Nations Resident Coordinator, India, presided over the culmination ceremony.

She marvelled the work done by PRATYeK | NINEISMINE and stated "Climate change is no longer a threat 100 years away, it is already here. Children and young people are not just victims. You are the future to bring change". She added, "Being yourself doesn't mean your voice cannot be heard."The forum witnessed multiple panellists from across the globe who spoke on various thematic areas affiliated with environmental challenges and the earth rights of the child.

This platform was created for children to place their opinions and the challenges they face as current citizens of their respective countries and to find creative solutions for local to global climate emergencies.

The organisers of this event, PRATYeK and Edmund Rice intend to engage with all the participants in future, thereby making this initiative a long-term process for advocacy on the 'Environmental Rights of Children'. This summit aimed to foster dialogue at an international scale, providing an opportunity to showcase youth-led climate action around the world.

Post these three days of interactive discussion,s a collaborative list of recommended solutions have been prepared which will be submitted to COP 26 (scheduled to be held in Glasgow, November 2021) for their consideration and to inform and influence these proceedings.

The report will be further presented to various ministries of the government of India, offices of international diplomatic convoys, media houses, and other duty-bearers.

Addressing the summit's subject of discussion, the panellists shared their thoughts on the topic. "This is an extremely timely discussion ahead of COP26. Your leadership in climate action is vital", said Peadar O'Hubain, from the Embassy of Ireland, New Delhi.

"I was amazed at your experience and moved by confidence. Your voice is being heard and your voice is making a difference. If our leaders don't take you seriously, they will regret as you'll soon become voters and they'll be out of power", said Tino D'Abreu from ERI Geneva that jointly organised the event. John Mullan added, "The cry of the poor and the cry of the Earth, we need to keep listening to these two."Steve Rocha, Director of PRATYeK and National Convenor of the NINEISMINE campaign said, "This ERth summit has been a wonderful launch of a process towards amplifying the voices of child-advocates who may be disenfranchised but certainly not disempowered. VOTE is an acronym for Voice Of The Empowered. This engaging summit and its upcoming processes will lead up to the COP-26 and later to UN documents underlining the environmental rights of the children."Explaining further, he added, "Through this platform, these budding earth pro-activists have claimed their 'vote' as the voice of the earth, the voice of the endangered (species), the voice of the excluded (communities), and the voice of every last child."While hosting the summit, Neha Jain, a 17-year-old Earth pro-activist, said, "It's high time we make a shift from being egocentric to being ecocentric. It's time we act. From deliberating with children across 50 nations to interacting with global leaders, this summit has truly empowered me and made me believe that impossible is possible potentially converting an event into a process that could turn into a movement, a youth-led revolution demanding climate action."The forum panellists included Ms Aneeta Pathak, founder of Anveshan - Experiential Learning and Unlearning Centre based in Auroville, Mr Jonathan Levy, child Participation expert from CRIA France, Br. Kevin Cawley, the Executive Director of the Thomas Berry Forum for Ecological Dialogue New York, Ms Seidel Frederique, a Sociologist, Senior Advisor on Child RightsPartnership, Switzerland, Br Brian Bond, the Director of Edmund Rice International, Geneva, Analisa Ramsahai, a steering group member for the Laudato Si Generation, Indonesia.

Other panel members were, Jyoti Raghavan from Aravalli Bachao in Haryana, Dr Nehaal Mayur, an International Development Expert and a Global Citizen based in the USA, Ms Ann Nichols from the Edmund Rice Network UK, Ms Kayla Brittan, a Child Safeguarding Champion from The Justice Desk, South Africa, Toshy Tataua from Edmund Rice Centre Australia a citizen of Kiribati a nation soon to be vanquished by climate change and Ms Neha, a fellow and area Convenor at the Environmental Education and Awareness division at TERI, India. (ANI)