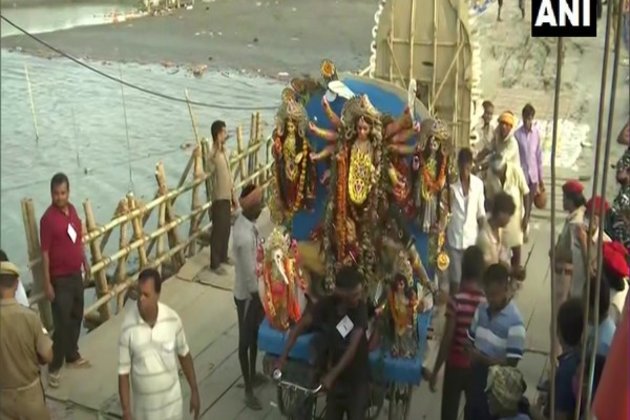 Guwahati (Assam) [India], October 15 (ANI): The pomp and gaiety with which Durga Puja was celebrated in Assam and other parts of the country came to an end on Friday evening with the immersion of idols of the 'goddess of strength' with traditional and religious fervour.

Devotees bid adieu to Goddess Durga on the occasion of Vijay Dashami today, a day that marks the triumph of good over evil.

The devotees took out huge processions on the way to the rivers and water bodies for immersion.

Two prominent inland water transport stops on the river Brahmaputra in Guwahati turned into a sea of humanity as scores of people on both sides of the city roads pulled out of their homes to catch a glimpse of the trolly carrying the idols for immersion.

The Assam administration made special arrangements to facilitate the immersion ceremony smoothly. The immersion which begins from 11 in the morning is continuing till 9 in the evening.

According to mythology on this day Goddess Durga annihilated the demon god Mahishasura after a fierce battle that lasted for nine days.

This day also marks Durga Visarjan or immersion of Durga idols signifying the journey of the Goddess back to Mount Kailash after ten days of stay at her parent's house on earth. Annually, Goddess Durga visits her paternal house with her four children in tow--Lakshmi, Saraswati, Kartikeya and Ganesha.

This year Durga Puja began on Monday, October 11 (Maha Shasthi). On Maha Shashti, Durga Puja celebrations begin with full enthusiasm and the idol of Goddess Durga is unveiled to visitors at the pandal with the beating of drums, known as 'Dhaak'. During Durga Puja, devotees wake up early to worship the goddess and follow other rituals. On the last day, devotees immerse Goddess Durga's idol in water which is known as 'Durga Visarjan'. (ANI)