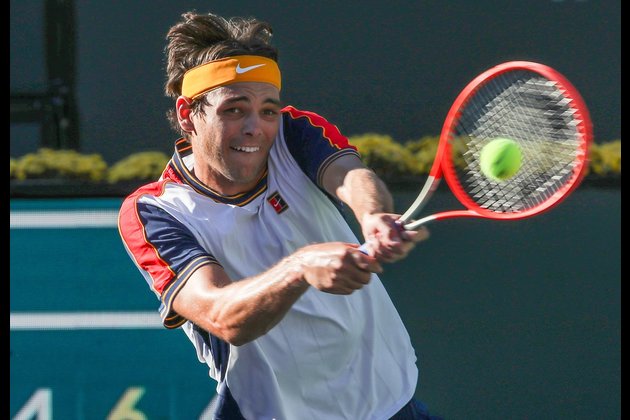 No. 31 seed Taylor Fritz stormed back from a set down and saved two match points before eliminating No. 3 seed Alexander Zverev with a 4-6, 6-3, 7-6 (3) victory Friday in the quarterfinals of the BNP Paribas Open in Indian Wells, Calif.

Both Zverev and No. 2 seed Stefanos Tsitsipas of Greece were upset in the round of eight. Earlier in the day, Georgian No. 29 seed Nikoloz Basilashvili took down Tsitsipas 6-4, 2-6, 6-4.

Fritz trailed Zverev 5-2 in the deciding set and had to stave off the German's chances to end the match in the eighth and ninth games. The 23-year-old American fought back to tie it 5-5, and after each player won one more game, Fritz grabbed the first four points of the tiebreak en route to winning on his third match point.

"The biggest thing was match point down, I wanted to make him serve it out, so I just fought as hard as I could to hold that game," Fritz said. "Then I got fortunate in his service game and from there I felt in control and felt really good under the pressure."

The only American left standing among the four semifinalists, Fritz grew up in San Diego, just a few hours from Indian Wells.

"It is amazing," Fritz said. "Especially the way that match ended with such high emotions with the crowd. The crowd was amazing and it is a dream come true."

Fritz will face Basilashvili on Saturday after Basilashvili pulled off his own upset in the quarters. He overcame Tsitsipas' 10 aces by saving six of 10 break points and breaking Tsitsipas four times in five tries.

The third set was knotted 3-3 when Basilashvili won the last two points to break Tsitsipas for the final time. The 29-year-old secured his first berth in an ATP Masters 1000 semifinal.

"I have played really great matches this tournament," Basilashvili said. "I was not that happy with how I played today but I was happy with how I managed my stress levels. First time in the quarterfinals and it is a big court and Stefanos is a super tough player."

The other semifinal will pit No. 21 seed Cameron Norrie of Great Britain against No. 23 seed Grigor Dimitrov of Bulgaria after each player notched upset wins of their own during Thursday's action.