Messi gives his verdict on Ronaldo at Man United 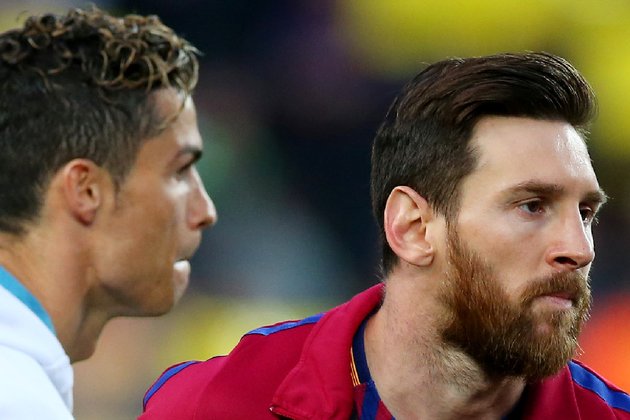 Lionel Messi has discussed his future, Cristiano Ronaldo's time at Manchester United, his favorites for the Champions League and the impact he expects new boss Xavi to have at Barcelona.

While Messi left his boyhood club where he had spent more than 20 years, Barcelona, to join Paris Saint Germain as a free agent, Ronaldo left Juventus in August to return to his first foreign club after he left Sporting Lisbon in 2003.

Speaking from his new home in Paris, the Argentina captain was asked what he thought of the Portuguese's second spell at Old Trafford.

"United are a very strong team with great players," Messi told Marca. "Cristiano already knew the club, but that was in another stage [of his career] and now he has adapted in an impressive way.

"From the beginning, he has scored goals as always and had no problems adapting.

"In the Premier League, he [has] not [found life] as good as we all thought, but it is a very difficult and even competition in which things take a lot of turns. After December, it will change a lot and anything can happen."

Direct rivals in Spain until 2017, when Ronaldo left Real Madrid for Juve, Messi was asked if he missed their duels in El Clasico.

"It's been a long time since we stopped competing in the same league," Messi pointed out.

"We competed individually and as a team for the same goals. It was a very beautiful stage for us and also for the people because they enjoyed it very much. It is a beautiful memory that will remain in the history of football."

Messi is tipping former teammate Xavi Hernandez to "contribute a lot" and help Barca "grow" as their newly-appointed head coach.

"He can contribute a lot," he said. "He is a coach who knows a lot, knows the club perfectly and has lived in Barcelona since he was a child.

"He will be a very important coach for the younger footballers because he will teach them. With him, the team will grow a lot. I do not have any doubt.

"I speak often with Xavi. We are friends, we have shared many things and since he left we have kept in touch.

"I don't remember what I told him in the message [after he joined] - I congratulated him on this new step and I wish him well.

"I'm sure he will do very well because he knows a lot, he is a hard worker and knows the club well."

Barcelona's all-time top scorer confessed that he expects to rejoin the Spanish giants, having been forced to depart because Barca had been unable to meet wage bill restriction rules.

"I always said that at some point I will return to Barcelona because it is my home and because I am going to live there," said the 34-year-old.

"And obviously if I can contribute and help the club, I would love to come back."

Messi was also pushed on who could win the Champions League. "Barcelona are going through a stage of reconstruction with a team in which there are many young players," he said of the Blaugrana, who are embroiled in a battle to qualify behind Bayern Munich in their qualifying group.

"Today I think there are better teams than Barcelona, ??but, although they give that impression now, that does not mean that later they will not be able to fight because we must take into account the arrival of Xavi, the renewed hope and the power to recover some [injured] players that they do not have now. They can keep growing and fighting.

At least six teams are realistically expected to compete for Europe's premier club trophy. The six-time Ballon d'Or winner discussed their chances after talking about his own side, PSG.

"Everyone says that we are the big favorites and I will not deny that we are one of the candidates by name, but we still need [some] things to be a really strong team," said Messi, whose team are a point behind the leaders of their qualifying group, Manchester City, ahead of their trip to the City of Manchester Stadium on Wednesday.

"We have to finish consolidating as a team and we have the advantage of having very great players to achieve it. But we are not the only ones: there are other great teams that are candidates.

"The Champions League is a very difficult competition, that's [what] makes it so beautiful and special. The best teams are there and it is getting more and more complicated. Yes, we are one of the favorites, but not the only ones.

"Liverpool are doing very well - they have returned to being the Liverpool that won the Champions League [in 2019].

"Then there is Manchester City, Bayern Munich, Real Madrid, Atletico Madrid... there are many teams that can fight for this Champions League.

"It's one of the most even and competitive years in recent times because there are several teams that can choose to win it."