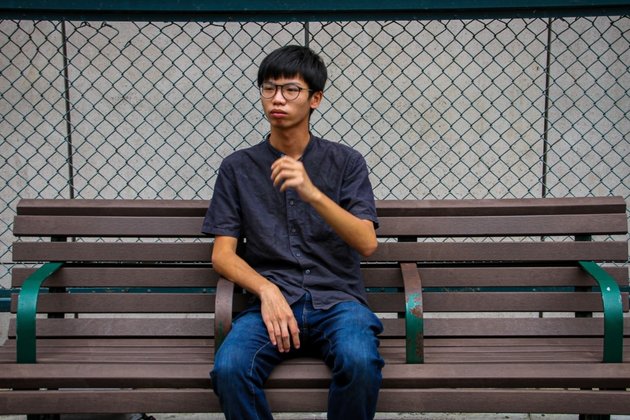 Chung, 20, is the youngest person to be convicted under Hong Kong's national security legislation since China's imposition of the measure last year.

Upon pleading guilty on Nov. 3, Chung said, "I have no shame in my heart," local media reported.

On Tuesday, his plea bargain got him a 25% reduction of his sentence, meaning Chung will serve 40 months for secession and 18 months for money laundering concurrently, with only three months of the latter sentence served separately.

Political scientist Joseph Cheng, who is formerly of Hong Kong but now lives in New Zealand, says he believes the 43-month sentence is too severe.

"I certainly believe that the sentence is overly harsh. There appears to be an intention to create a deterrence effect. Advocacy for independence even in the absence of concrete action will attract severe penalties," Cheng told VOA via email.

Activist Chung is the former convener of youth activist group Studentlocalism, a pro-independence student organization that was founded in 2016. During his national security trial, prosecutors said Chung had made social media posts calling for people to join protests and get rid of Chinese colonial rule.

Authorities arrested the activist in October 2020 outside the U.S. Embassy in Hong Kong. He was the first political figure to face charges under the security law.

Weeks before he was detained, Chung, then 19, spoke to VOA, outlining his fears that Hong Kong authorities would soon arrest him. Last December, the youth activist received a four-month jail term after being sentenced under Hong Kong's Basic Law, for insulting China's national flag during anti-government protests in 2019. The Basic Law is the city's default legal system.

Joseph Cheng said speaking out in Hong Kong has become too dangerous.

"Already people do not want to speak out. Journalists have difficulty finding people to comment on sensitive topics; however, there are many activists in exile, and they will continue to articulate their views. In Hong Kong, people remain silent but the anger is there," he added.

"His sentencing would drive Hong Kong activists in exile, especially myself, to go the extra mile to counter the Chinese Communist Party's influence around the globe. It would not deter Hong Kongers."

"Since the pro-democracy voices in Hong Kong, including newspapers, have been stifled, it is inevitable that the genuine opinion of Hong Kongers has to be channelled through overseas Hong Kongers," he said.

Britain returned control of Hong Kong to China in 1997 under the Sino-British Joint Declaration, under which the city would enjoy a "high degree of autonomy" for 50 years. But activists in the city have complained that China has long encroached on those freedoms. China maintains Hong Kong is an inalienable part of the country and that calls for independence have no legal basis.

After 2019's anti-government protests, Beijing implemented the national security law on Hong Kong, prohibiting secession, subversion, terrorism and collusion with foreign forces, and its details can be widely interpreted.

Since then, dozens of opposition activists and lawmakers have been arrested and are awaiting trial, while others have fled overseas. Slogans have been banned, while pro-democracy books have been removed from libraries and schools. In June, pro-democracy newspaper Apple Daily closed its doors after 26 years of journalism with its founder Jimmy Lai in jail. At least 50 civil society groups have also disbanded since the security law came into force.

Chung is the third person to be sentenced under the security law for secession.

Activist Leon Tong Ying-Kit, 24, was the first person sentenced under the law. In July, he received a nine-year sentence following his conviction for terrorism and secession.

Both defendants had pleaded not guilty.

Eric Yan-ho Lai, a law and political analyst and fellow at Georgetown University Law Center in Washington, said that Chung's sentence was significantly lower after a guilty plea, and could influence the pleas of future defendants facing trial under the security measure.

'The sentence imposed on Tony Chung would give an example to the following national security law defendants to consider whether to plead guilty or not, as the length of sentence is lighter than Ma and Tong who didn't plead guilty."

Lai added that defendants are already feeling the pressure to plead guilty because of the costs of legal representation.

"The change of the surrounding environment, including the new legal aid system that defendants can no longer choose their own legal representation if they apply legal aid, so, also create a combined effect of pressuring defendants to consider pleading guilty or defending their words and deeds in the courtroom."

The law analyst questioned whether the crackdown on younger opposition voices benefits Hong Kong in the long term.

"The governments shall ask themselves whether criminalizing the young people with draconian laws can really win back the public trust towards the court or the governments," he added.