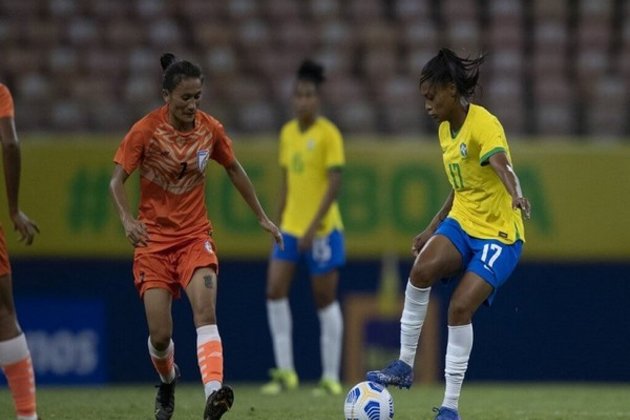 The midfielder is looking forward to a long run to inspire young girls across the country to take up the 'beautiful game.'"The AFC Women's Asian Cup will be a special moment for us all. All eyes will be on us. So if we perform well, that can inspire more girls to come forward and take up the sport," said Kamala to AIFF. "The World Cup Qualification is a big motivation for us."While the Indian Women's Team plans to take it one step at a time, the larger goal of getting closer to qualification for the FIFA Women's World Cup 2023 remains in sight. A quarterfinal appearance could take India one step closer to that goal.

At the age of 29, midfielder Kamala is one of the more experienced players in the Indian Women's Team squad - the ups, the downs, she has seen it all. However, like many young female athletes, Kamala has also had to fight against the perception that the beautiful game is not for women.

"I used to play a number of sports as a kid, like cricket, hockey, football and sepak takraw. But I went towards football eventually, probably because it was a much cheaper sport to sustain," said the midfielder. "My father did not want me to play football in my younger days. But my aunt came forward and helped me with that. But my dad realized that I could do something with football, once I started doing well in a few local tournaments."Sadly, Kamala's father did not live to see his daughter make it all the way to the National Team. "I understand why he stressed more on me studying than playing football. He wanted me to be self-sufficient. But if he were still alive, he would have been proud of me. Football has given me a living," she smiled.

While Kamala's aunt stuck by her side, not everyone in her village, except for her footballer friends and childhood coach, liked the fact that a girl was playing the sport. However, receiving the AIFF Women's Player of the Year Award in 2017 changed many perceptions.

"Very few people supported me to play football at first. My coach Biren was one of those who convinced my father to let me play football," recalled Kamala.

"But ever since I was given the player of the year award, things have changed. Now, those who used to be against me, ask their kids to take football tips from me, whenever I go back home. And I am more than happy to oblige. There's a certain victory in that," she added.

India, being the hosts of the AFC Women's Asian Cup India 2022, have been placed in Group A, where they will face off against IR Iran (January 20), Chinese Taipei (January 23), and China (January 26).

With 12 teams participating in the Group Stage, eight of them will progress through to the quarterfinals, and depending on other results, could take closer steps towards qualifying for the FIFA women's World Cup, Australia 2023. (ANI)