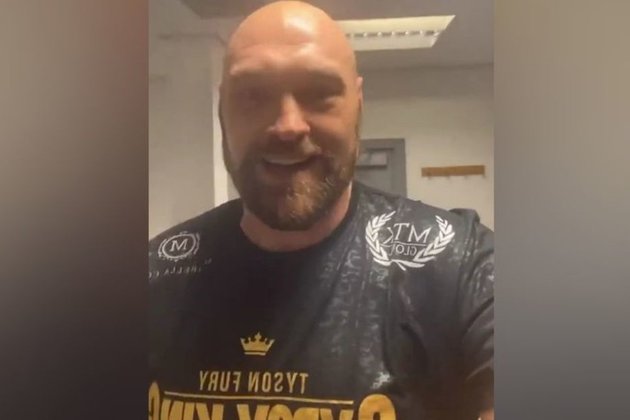 WBC heavyweight champion Tyson Fury has taken aim at British rival Anthony Joshua and pledged to bring the rest of the division's belts back to the UK by beating Ukraine's Oleksandr Usyk.

Before a packed crowd at the Tottenham Hotspur Stadium in September, a battle of Olympic gold medalists saw Joshua outclassed by Usyk and relieved of his WBA, IBF, WBO and IBO straps via unanimous decision.

Furthermore, the result also meant that a unification box office smash planned between AJ and Fury - which could have taken in two dates in Saudi Arabia and London - had to be shelved and left all concerned missing out on lucrative paydays.

Almost four months on from the disappointment, Fury has rubbed salt into Joshua's wounds and blasted him for letting the side down.

Tagging the Brit and Usyk in a social media video as he bounced on a treadmill, 'The Gypsy King' started by saying: "You know what I can't believe? That AJ has gone and given Ukraine all the heavyweight belts back after all my hard work in stealing them [from Wladimir Klitschko in late 2015].

"You let a little man come up from middleweight and set about you and take all your belts," Fury said, referring to undisputed cruiserweight king Usyk's rise through the ranks.

"Now it is going to take a real British Lancaster Bomber like me to go and bring the belts back to Britain!"

"You are useless dossers," he blasted the pair.

Meanwhile in Ukraine, as he waits to learn of whether his next opponent is Joshua in an April rematch or Fury if AJ is paid step-aside money, Usyk has been captured training in unusual conditions.

In a video shared on his Instagram stories, 'The Cat' is seen in the snow with steam being blown in his direction while letting off a series of shadowboxing combos.

Yet while Fury seems to be open to heading to Ukraine to face Usyk if needs be, Joshua's promoter Eddie Hearn has thrown cold water on a homecoming fight for the division's most dominant champion if he meets his man again.

"We have the ability to stage the fight where we want but at the same time it has to generate enough money to know that we've done our jobs," the Matchroom boss said recently.

"Kiev is not the place to generate money."