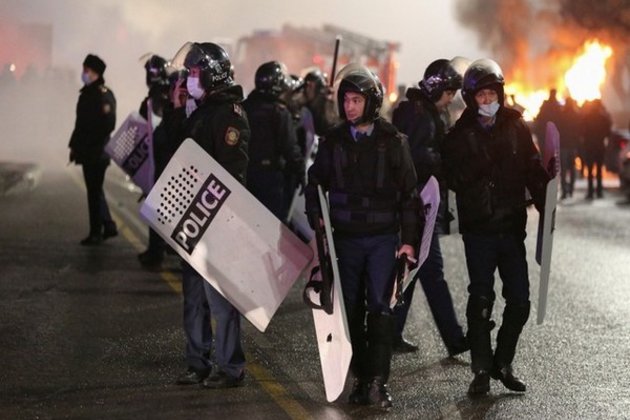 Nur Sultan [Kazakhstan], January 13 (ANI): The red level of the terrorist threat has been cancelled in 14 regions of Kazakhstan, including the capital, the National Security Committee said in a statement, reported Sputnik News.

"As of now, the situation has been stabilized in 14 regions of the Republic of Kazakhstan," the committee said.

The critical level of the terrorist threat has been cancelled in Nur-Sultan, Shymkent and other 12 regions of the country, it added.

Notably, the Kazakh government had set the terror threat alert at the critical, or red, level, the National Security Committee said on January 7, reported TASS.

More than 1,900 participants of the civil unrest have been detained in the Kazakh city of Almaty within the past 24 hours, the city commandant's office said.

"A total of 1,925 participants of illegal rallies, looting and other crimes have been detained," the commandant's office said in a statement, adding that the security forces had seized many weapons and ammunition.

Additionally, the number of persons held in connection with the disturbance in the Kazakh city of Shymkent has surpassed 3,500, according to regional TV channel Otyrar.kz, citing the director of the city's commandant's office, Yeraly Zhumakhanbetov, reported Sputnik News.

Earlier, local officials announced the imprisonment of 2,700 individuals and the injury of 45 police officers following rioting in the city.

"The situation in the city of Shymkent is stable. Since the start of the unrest, 3,520 citizens have been brought to police stations. To date, 366 citizens have been held administratively accountable. Decisions on arrest have been made against 271 of them, 40 have been fined and 55 warnings have been issued," Zhumakhanbetov said, reported the news agency.

Notably, protests in Kazakhstan were infuriated by the massive jump in the fuel price and the protests have led to the resignation of the government. (ANI)