The LNFS continues its international expansion; reaches an agreement with the IFA in India 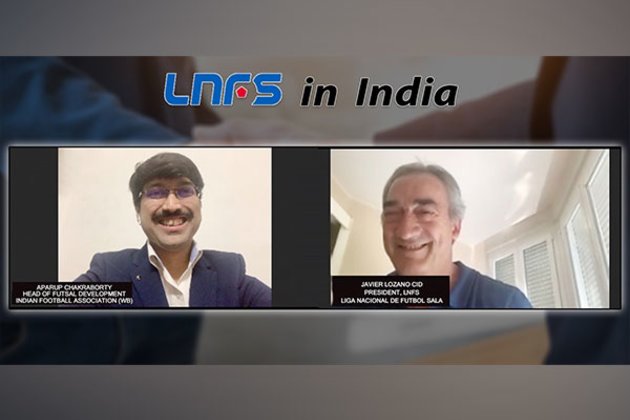 New Delhi [India], May 10 (ANI/SRV): The National Futsal League has signed an agreement with the Indian Football Association WB(IFA) to export its knowledge and provide its advice to advance the growth and development of Futsal in the Indian country through the IFA Futsal Academy.

Both entities will work together to promote the training of coaches and advice on competition, organization of events, marketing and communication in the IFA Futsal academies in order to promote the development of Futsal in India.

The LNFS takes another step in its international expansion, reaching the Asian continent through this new agreement and certifying its presence in four continents, after the alliances in England with the NFL (National Futsal League), in the USA with the US Youth Futsal, in Australia with the FAF (Federation of Australian Futsal), and in the Baltic countries with the BFL(Baltic Futsal League).

The competitions organized by LNFS:LNFS Professional Futsal League: First Division-Includes16 teams competing over a 10-month season where the top 8 regular season teams earn the opportunity to compete in the LNFS Play-off Title at the end of the regular season Second Division-Include s16 teams competing over a 10-month season Spanish Cup: Annual tournament competition which is featuring the top 8 regular season teams at the middle point during the season.

Spanish Super Cup: Annual tournament competition which is featuring the winners of the LNFS First Division and the Spanish Cup respectively.

This new agreement is part of the project launched by the LNFS to help the development of international Futsal together with the Leagues and Associations that consider LNFS as a consolidated brand as a world reference and a management and development model to support and advance its internal growth.

The President of the LNFS, Javier Lozano said, "The signing of this agreement with India is a great satisfaction for us because it is the verification that Futsal from different parts of the world considers LNFS as a reference to improve. Our vocation is to help because they also helped us, and Futsal organizations need this solidarity to continue growing globally."IFA Secretary, Joydeep Mukherjee said, "The primary goal of the Indian Football Association (WB) is simply to grow the game of futsal in Bengal. By partnering with LNFS, if we have access to more resources then this can be a truly exciting opportunity for football and futsal players of Bengal."After signing the agreement, the Head of Futsal Development, IFA, Aparup Chakraborty said, "This is special news for Indian futsal! LNFS is the world's most successful and major professional futsal league, which has shown interest to develop Futsal in India from grassroots to Elite. I will involve Schools, Football AcademiesClubs and follow the LNFS Spanish Pathway which has been successfully implemented in Spain since 1989 and Won 2 FIFA World Titles under Javier Lozano."Subrata Dutta, the Chairman of Indian Football Association (WB) was extremely delighted and congratulated Aparup for taking this initiative to develop Indian futsal.

To know more visit:This story is provided by SRV. ANI will not be responsible in any way for the content of this article. (ANI/SRV)