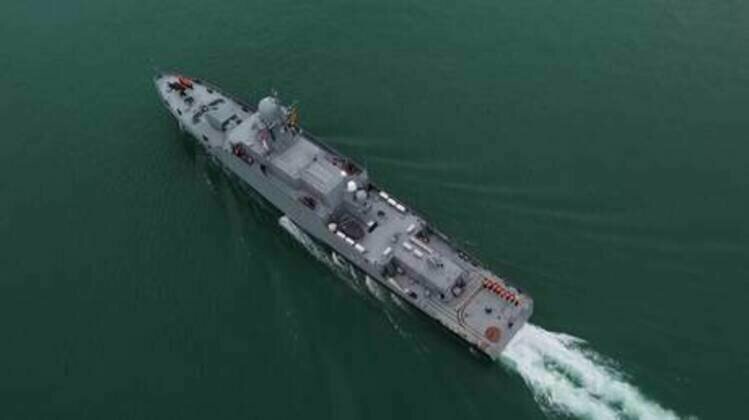 Such an international mission would only increase tensions in the Black Sea, Russia's deputy FM says

Moscow has warned against putting together an international naval coalition to make sure ships with grain leave Ukrainian ports amid a claimed Russian blockade in the Black Sea.

Ships with grain have been unable to depart from Ukraine amid the conflict between Moscow and Kiev. The Ukrainian authorities and the West have been blaming Russia for blocking their passage, while Moscow has insisted that the logistical problems have been created by naval mines placed by Ukraine.

The arrival of a foreign naval coalition "would seriously escalate the situation in the Black Sea," Russian Deputy Foreign Minister Andrey Rudenko said on Wednesday.

The idea that "willing" countries should provide its warships and planes to "ensure that the grain supplies can leave [the Ukrainian port city of] Odessa safely and reach the Bosphorus without Russian interference" was proposed by Lithuanian Foreign Minister Gabrielius Landsbergis during his visit to Great Britain on Tuesday.

UK Foreign Secretary Liz Truss reportedly voiced London's support, in principle, for such a coalition. Not only the UK, but countries affected by the grain shortage, such as Egypt, could take part in the non-NATO mission, according to Landsbergis.

Rudenko also replied to European Commission President Ursula von der Leyen, who claimed on Tuesday that Moscow was "knowingly blocking the Black Sea and thus responsible for the starvation of millions of people."

"We are always ready for dialogue with everyone who strives for peace, for the peaceful resolution of all problems" and that includes the Ukrainian grain issue, the Russian diplomat said.

Rudenko reminded that Moscow repeatedly pointed out that "the solution to the food problem requires a comprehensive approach, including the removal of sanctions that were imposed on Russian exports and financial transactions. It also requires Ukraine to demine all ports where ships are docked."

"Russia is ready to provide the necessary humanitarian path [for ships with grain] and it's so doing every day," he added.

UN Secretary-General Antonio Guterres earlier warned that the fighting between Russia and Ukraine has put the world on the brink of "a hurricane of hunger and a meltdown of the global food system" as the two countries are major producers of food, accounting for, among other things, 30% of global wheat exports.

Russia attacked the neighboring state in late February, following Ukraine's failure to implement the terms of the Minsk agreements, first signed in 2014, and Moscow's eventual recognition of the Donbass republics of Donetsk and Lugansk. The German- and French-brokered protocols were designed to give the breakaway regions special status within the Ukrainian state.

The Kremlin has since demanded that Ukraine officially declare itself a neutral country that will never join the US-led NATO military bloc. Kiev insists the Russian offensive was completely unprovoked and has denied claims it was planning to retake the two republics by force.