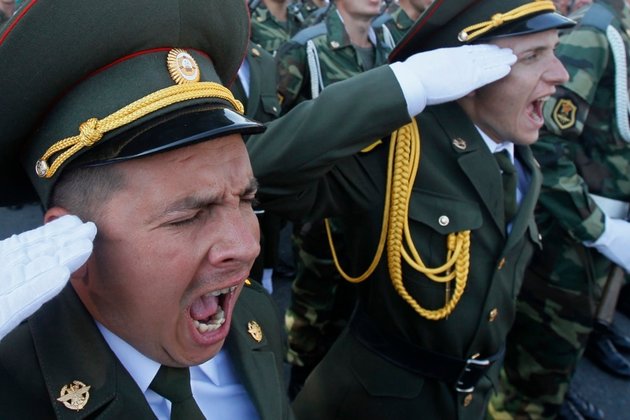 Russia's invasion of Ukraine has left nearby Moldova feeling vulnerable and threatened.

With a small military of its own and a decades-long frozen conflict in breakaway Transdniester fueled in large part by Moscow, impoverished Moldova is worried it could be the Kremlin's next target.

The United States and Britain, as well as the EU, have recently come forward with proposals to beef up Moldova's modest military.

That has sparked a debate in this country of some 2.6 million people about abolishing its neutral status, with many arguing it no longer serves the country's best interests. Moldova's neutrality is enshrined in the country's post-Soviet constitution.

Chisinau needs to be roused from its 'slumber and inertia' to resolve its security challenges given Russia's 'relentless war in Ukraine,' said Igor Munteanu, a recent Moldovan ambassador to the United States.

'Everything is related to this paradigm of neutrality which was, as I said in a certain way, a geopolitical rape...by imposing a poisonous peace and limits of external action by accepting neutrality since 1994,' Munteanu recently told RFE/RL's Moldovan Service.

The debate on whether Moldova should scrap neutrality and move closer to NATO intensified after British Foreign Secretary Liz Truss told The Daily Telegraph on May 20 that Moldova should be 'equipped to NATO standard' to help protect it against the threat of a Russian invasion.

She said it was clear that, despite limited success in Ukraine, President Vladimir Putin retained 'ambitions to create a greater Russia.'

Moldova, once a Soviet republic, sits on Ukraine's southwestern border. It does not share a border with Russia, but is close to some of the regions currently occupied by Russian forces in Ukraine's south. Moldova is not a member of NATO, although it did apply to join the European Union less than two weeks after the invasion of Ukraine. The country's pro-Russian opposition has not welcomed Western proposals of military help.

Truss's offer was not the first by a Western official. Derek Chollet, a senior policy adviser to the U.S. secretary of state, said on May 17 in Chisinau that the United States wants to help the Moldovan Army become 'more capable, more effective, and more modern in order to defend its sovereignty and territory.'

During a visit on May 4, European Council President Charles Michel said the European Union would provide military equipment to the Moldovan military.

How Neutrality Could Help Moldova

But would scrapping neutrality mean much to Moldova in practical terms?

It has not stopped Moldova in the past or present from cooperating with NATO, notes political analyst Cristian Vlas. 'Moldova's neutrality status does not prohibit the government from interacting with the NATO military or other militaries,' Vlas told RFE/RL in e-mailed remarks.

In fact, Moldova has long had close ties with NATO, Vlas explained, pointing to the latest agreement between Moldova and NATO, the Individual Partnership Action Plan (IPAP) that covers 2022 and 2023.

'This is in line with the constitution and contains joint plans for security assistance, and, in a larger sense, for the Moldovan security sector,' Vlas said.

NATO has an 'open door' policy, meaning it is open to any European country joining as long as the proposed member is 'in a position to further the principles...and to contribute to the security of the North Atlantic area.'

SEE ALSO: First Ukraine, Now Moldova? Is The Kremlin About To Expand Its War?

In practical terms, scrapping neutrality 'would extend the possibilities for training, receiving military equipment, and creating a belief among citizens that the army is fulfilling its role,' said Munteanu.

However, dropping its neutrality would only mean something if Moldova could afford to invest in its army as a member of NATO, said Dionis Cenusa, a visiting fellow at the Vilnius-based Eastern Europe Studies Center.

'No neutrality means applying for NATO membership, but it was rejected for Ukraine and Georgia and it is very unpopular in Moldova,' Cenusa told RFE/RL, referring to Kyiv's and Tbilisi's so far fruitless efforts to join the Western military alliance, something the NATO left open at its summit in Bucharest in 2008.

'The government in Chisinau faces a dilemma,' said Ian Bond, director of foreign policy at the London-based Center for European Reform. 'Over the last few decades, the divide between Chisinau and Tiraspol has to some extent been blurred by Transdniester business interest in taking advantage of Moldova's (very slow) integration in European markets, while Moldova's neutrality has kept it out of Russia's eyeline.'

Given its neutral status plus a lack of funds, Moldova has not allocated much in past years to defense spending, explained Alexandru Flenchea, a former Moldovan minister, in a Telegram post. He noted that defense spending has never exceeded 0.4 percent of GDP.

The military budget for 2021 was reportedly said to be some 914 million Moldovan leu ($48 million) and the number of active military personnel numbers about 5,000, with a further 66,000 possible reservists.

The Western offers to bolster Moldova's meager military came after President Maia Sandu said on April 27 that the armed forces had been ignored for 30 years and that they were due a much-needed overhaul, noted Igor Botan, the director of the Moldovan think tank, the Association for Participatory Democracy.

Moldovan soldiers stand in formation before heading off to take part in military exercises with a number of NATO countries in 2017.

Moldova must jump at the chance of Western military aid, argued Botan, compiling a list of defensive weapons that its military urgently needs 'to prove it is willing to defend itself.'

'If they want to ensure the sovereignty and independence of Moldova, the authorities must create a minimum capacity to withstand a possible invasion so that they can be helped later. Otherwise, if the Republic of Moldova is attacked and does not resist, then it will be a kind of Crimea that will be said to have agreed to be incorporated into the Russian Federation,' Botan wrote, referring to Russia's relatively quick military seizure of the Ukrainian peninsula in March 2014.

'As for the U.K. offer, I personally cannot tell what will be on the table. It is certain that the government will not demand more than it can handle and will be mostly focused on cybersecurity, intelligence capabilities, border protection, and, maybe, air defense systems (this might be an overstretch),' Vlas commented to RFE/RL.

Following the offer of military aid to Moldova by Truss, Russian Deputy Foreign Minister Andrei Rudenko said Moscow was watching Chisinau's reaction, but that the supply of NATO weapons to a neutral state 'raised questions.'

Since Russia launched its unprovoked invasion of Ukraine on February 24, Chisinau has watched warily, concerned that the Kremlin may have its territory in its sights next.

Those fears were further fueled on April 22, when a senior Russian general, Rustam Minnekayev, spoke about Russia occupying southern Ukraine and the possibility of securing a 'road out' to the breakaway region of Transdniester, where he said -- without offering any evidence -- that Russian speakers faced persecution.

Russia has around 2,000 troops in Transdniester, most of them guarding an ammunition depot at Cobasna, the largest such facility in Eastern Europe.

Separatist Transdniester also has its own armed forces, which number between 4,000 and 7,500, although little is known of their fighting capabilities or equipment.

While most military analysts believe Russia does not have the military resources to launch a fresh offensive toward Transdniester, the region witnessed a flare-up in unrest last month.

In late April, the de facto Transdniester authorities said that explosions had targeted their state security headquarters in the main city of Tiraspol, Soviet-era radio towers used to broadcast Russian news, and a military unit in a village outside the city.

Inside Moldova, the pro-Russia opposition socialists issued a statement on May 23 expressing 'deep concern' over the British foreign minister's comments and 'strongly condemned' consultations between Moldovan authorities and NATO member states if they took place 'behind closed doors.'

It was under the socialists, think tank director Botan pointed out, that Moldova first began strengthening ties in 2006 by signing its first NATO IPAP.

'If we remind the opposition who launched cooperation with NATO then we see how the current arguments of the opposition aren't convincing,' said Botan.

Any compromise between the two sides may be unlikely especially after former President Igor Dodon was detained by police on corruption charges on May 24.

Dodon, a close ally of Putin, was president of Moldova from 2016 to 2020. He was defeated in November 2020 by Maia Sandu, a U.S.-educated politician who ran on a ticket of closer relations with the West.

The former ambassador Munteanu admitted that any debate on altering Moldova's security status will take time and won't happen overnight.

'Nobody is demanding immediate NATO membership,' Munteanu said, calling for a 'national dialogue' on the security direction Moldova will ultimately take.