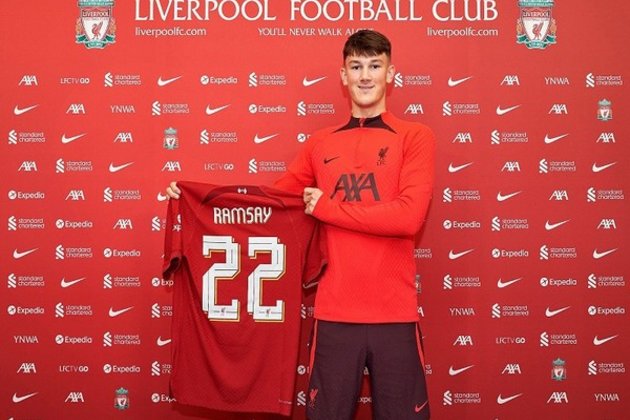 The right-back joins the Reds on a long-term contract after passing a medical and finalising the transfer at the AXA Training Centre.

Ramsay progressed through the youth ranks at Aberdeen to make his senior debut in March 2021 and departs having played 39 games, with nine assists and one goal.

"I'm just buzzing and it's a dream come true really to be here," Ramsay told Liverpoolfc.com after sealing the switch.

"It was a dream come true to play for Aberdeen, and now to be at one of the biggest, if not the biggest club in the world, it's a massive achievement and I'm looking forward to trying to show the fans what I've got.""Hopefully I can come in in pre-season, show everyone at the club, the staff, and players what I've got and then we'll see what happens from there."Ramsay is Liverpool's third new signing of the summer window following the arrival of Darwin Nunez and the announcement that Fabio Carvalho will officially join the club on July 1.

The defender, who has been capped three times by Scotland U21s so far and gained experience in the Europa Conference League with Aberdeen last season, will take the No.22 shirt with the Reds.

And he is already looking forward to getting started with his new teammates when Jurgen Klopp's squad begin preparations for 2022-23 next month.

"There's been a lot of young players that have played - the likes of Trent [Alexander-Arnold] and Harvey [Elliott] as well, there's a lot more," said Ramsay.

"There's obviously a pathway here - that's one of the reasons I chose it as well. It's not just a massive club, they give young players chances in the first team. So if I can come in in pre-season, put my mark down, then there's no reason why I can't push to get in the first-team squad," he added. (ANI)