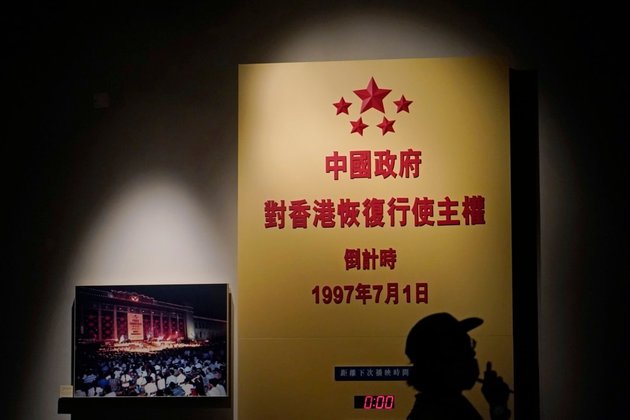 HONG KONG - Experts call China's most recent move to rewrite Hong Kong's history textbooks part of a larger plan to solidify a national identity in the city, which has been rocked by political turmoil since 2019.

Local media reported this month that new textbooks in Hong Kong secondary schools - still under review by the Education Bureau - say Hong Kong was not a British colony because Beijing did not recognize the unequal treaties that ceded the financial hub to Britain, according to The South China Morning Post. This is not a new Chinese position.

According to the new textbooks, China never gave up its sovereignty over Hong Kong and therefore, while the city was under Britain's colonial governance it was not a colony, another local media outlet, Mingpao, that has access to the textbooks reported.

The new textbooks also call 2019 pro-democracy protests "severely violent events, parts of which incited sedition and overthrowing the government, posing a threat to the sovereignty, national security and benefits of Hong Kong." They say outright that "foreign forces" were involved in the movement, and that the national security law implemented in 2020 "respects and protects human rights."

The textbook overhaul is aimed at instilling Chinese nationalism in the city after the protests, according to Gina Anne Tam, an assistant professor specializing in Chinese history at the Trinity University. 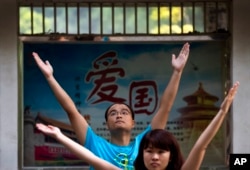 Employees of a Chinese bank take part in a motivation exercise at Ritan Park in Beijing, Sept. 9, 2013. The word of a propaganda poster, background, reads 'Patriotism.'

It is "an attempt to downplay any narrative that treats Hong Kong as having distinct historical legacies from China," Tam told VOA.

She said part of what constitutes Hong Kongers' identity is the city's colonial history.

"Hong Kong's colonial history was certainly violent and oppressive. But the way Hong Kongers created a community within those circumstances and fought back against British colonialism, in part, helped create the unique Hong Kong society and culture that exists today."

She added that recognizing a single version of history "strikes a similar resemblance" to its narrative revolving around Taiwan and Tibet - an idea echoed by Steve Tsang, the director of the China Institute at the SOAS University of London.

"The Communist Party has a monopoly of the truth and of history in China. Since Hong Kong is being integrated into the PRC [People's Republic of China] more fully after the 2019 protests, the 'one country, two systems' and 'Hong Kong people governing Hong Kong' concepts are now subjected to only one interpretation - the party's," Tsang said, referring to the Chinese Communist Party.

He said 2013 guidance to local governments to rein in the "noteworthy problems" related to ideologies that China deemed threatening to its governance, known as "Document 9," started an era of allowing a single interpretation of history in China.

"Hong Kong was previously allowed to be an exception. Not any longer," he said. "In the [Chinese President] Xi [Jinping] approach to history, facts are merely incidental. Only interpretation matters, and only one interpretation is allowed."

UN excludes Hong Kong in its list of recognized colonies

Not recognizing Hong Kong as a colony has been China's stance for decades. In 1972, Chinese Ambassador to the United Nations Huang Hua claimed full sovereign rights to Hong Kong and Macao and called the ceding of both cities a result of "a series of unequal treaties which the imperialists imposed on China" in a formal letter.

The settlement of the questions of Hong Kong and Macao is "entirely within China's sovereign right," Hua wrote, and does not fall "under the ordinary category of colonial territories."

"Consequently, they should not be included in the list of colonial territories covered by the declaration on the granting of independence to colonial countries and people," Hua wrote in the letter.

That November, the U.N. General Assembly officially excluded both cities from the U.N. list of colonial territories.

Rita Fan, a former lawmaker in Hong Kong and a member of China's National People's Congress said this month she would ask Western media to "double-check what happened in 1972 in the U.N." and pointed to the Western attention to the textbook changes as a way to bolster "wrong concepts of 'Hong Kong independence' and 'self-determination' that have infiltrated into Hong Kong" in an interview with state media Global Times.

"What the Hong Kong government is attempting is to gradually explain and correct these wrong concepts Western countries hope Hong Kongers will accept. Only if Hong Kong teachers and students can understand history correctly, can we prevent the requests of for self-determination and universal suffrage," she said.

However, colonial governance and identity as a colony cannot be separated, a Chinese history teacher, who asked not to be identified, at a secondary school in Hong Kong told VOA. 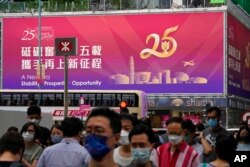 People walk past a billboard featuring the celebration of the 25th anniversary of Hong Kong handover to China, in Hong Kong, June 17, 2022.

"It is wrong to say that Hong Kong was never a British colony, as multiple historical documents show that. Colonial governance and the concept of colony should not be interpreted separately," she said.

"And as a teacher, we need to have sufficient evidence to tell our students that foreign forces were indeed the driver of the 2019 protests, but I don't think there is enough proof."

While she said Chinese history is an important part of national education that should be strengthened, she does not think the wording change is right.

"After 2019, China probably wants to bolster national education in Hong Kong so citizens feel a stronger sense of belonging. ... Personally I don't quite accept this, and I would teach colonial governance and the concept of colony together," she added.

In the future, though, she admitted that she and other teachers will have to follow the guidelines of the school and the Education Bureau.

"While this doesn't negate the possibility of unique senses of identity forming, it makes it that much harder. Once something is normalized, it is significantly harder for anyone to try and complicate or question it," she said.