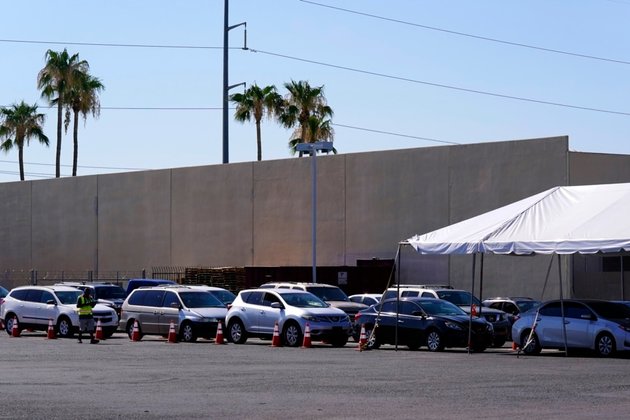 Washington - From Phoenix, Arizona, in the southwest United States, to Jackson, Mississippi, in the southeast U.S., people are waiting in long lines in their vehicles to receive food assistance from food banks and mobile pantries.

Soaring inflation in the U.S. is raising the price of everything from food to gas to rent. And that's been making it hard for many people to buy the food they need.

'We're seeing a lot more families who are struggling to make ends meet because the dollar isn't going as far as it used to at the grocery store,' said Kellie O'Connell, CEO at Nourishing Hope, a food pantry in Chicago. 'So now folks are needing to make difficult choices like paying for medicine or buying food.'

In Phoenix, 'a lot of people on fixed incomes, especially in our senior community, go to the grocery store and see the skyrocketing prices, especially on necessities like milk, eggs and meat,' said Jerry Brown, director of media relations for St. Mary's Food Bank. 'And they may not be able to afford these items.'

In Virginia, Maria Aguilar, who immigrated from El Salvador, works two jobs to stay afloat and take care of her three children.

'Going to the grocery store is a challenge because food is so expensive,' she told VOA. 'Knowing I can get additional food makes a big difference,' she said, as she brought bread, fruit and other provisions to her car at Food for Others, a food bank in Fairfax, Viriginia, near Washington.

The demand for food is continuing to grow.

'We are seeing much longer lines at food pantries and soup kitchens in Mississippi,' said Kelly Durrett, director of external affairs for the Mississippi Food Network.

In this undated photo, a volunteer puts food boxes into a car at St. Mary's Food Bank in Phoenix, Arizona.

The network's 430 partners provide food to those in need in the state, the poorest in the U.S. Starting in June, Durrett said, the number of people coming to the network's partners had increased between 10% and 20%.

'Our clientele is the working poor who have minimum wage jobs that keep them at the poverty level,' Durrett told VOA.

'Some people are arriving early at mobile food pantries, waiting for them to open,' she said. 'With so much demand, some pantries quickly run out of food.'

The largest food bank in the U.S., in the city of Houston, Texas, feeds some 1 million people every year through schools, churches and other partners.

Brian Greene, president and CEO of the Houston Food Bank, told VOA, 'We're not having to turn anyone away, but we can't be as generous with food now as we would like. A family is probably not going to get as much food as they would have a year ago.'

In this undated photo, vehicles line up at a Houston, Texas, food distribution site sponsored by the Houston Food Bank.

Some are concerned that the food situation could become as serious as it was during the height of the coronavirus pandemic.

'We're inching closer every month,' said Meredith Knopp, president and CEO of the St. Louis Area Foodbank. 'It is troubling to see so many people in line and needing assistance, many for the first time. We also have people who are coming and saying, 'I'm only able to feed my kids, and I haven't eaten in two days.''

Fresh fruit and other produce are among the items handed out to some 500 families who came to a food fair in suburban St. Louis, Missouri, on July 27, 2022.

Annie Turner, executive director of Food for Others, said that while the need for food has gone up, food donations have gone down.

'The number of families who came to our warehouse to get food nearly doubled from June 2021 to June 2022,' she said. At the same time, 'we've seen a 42% decrease in food donations since the high cost of food is also affecting our donors.'

'We used to purchase about 9% of the food we distributed,' she added, 'but now that's grown to 32% during this past year.'

The story is similar at other food banks across the U.S.

'Our donations from grocery stores have decreased by about 33%, and so we have to supplement that by buying food,' said O'Connell in Chicago.

In Phoenix, 'we will probably have to purchase about 200% more food in the coming year since we know we're not going to receive it in donations,' Brown said.

'I'm hopeful that communities will rally to provide food aid like they did during the coronavirus pandemic.' O'Connell said.

'We're telling local farmers that we'll arrange for volunteers to pick fruit and vegetables that can be distributed to people in need,' Knopp said.

At Food for Others, William Gonzales said he was grateful for the food he had been given. 'My family has been struggling, and this is helping make our lives so much easier.'

The network's 430 partners provide food to those in need in the state, the poorest in the U.S. Starting in June, Durrett said, the number of people coming to the network's partners had increased between 10% and 20%.

Leo Delgado, warehouse manager for Food for Others in Fairfax, Virginia, helps Maria Gonzalez take food and flowers to her car. In addition to food, a grocery store donates flowers.