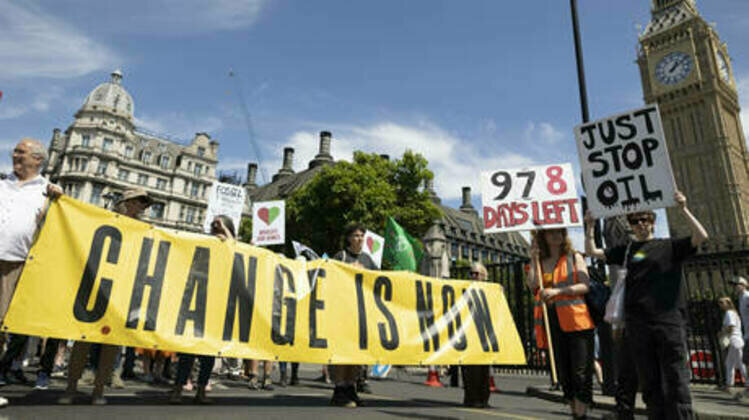 Climatologists around the world should leave their labs and not just take to the streets but engage in acts of civil disobedience to focus attention on the looming climate disaster, a group of scientists has argued in a piece published by the journal Nature Climate Change.

The group, which consists of five climate scientists and one political scientist specializing in civil disobedience studies blamed "inaction from governments, industry and civil society" for the potentially looming disaster and warned that "time is short to secure a livable and sustainable future."

Those "with expertise" who are "willing to convey their concerns in a more uncompromising manner" can resort to civil disobedience, the group then states, praising such tactics for their "potential to cut through the myriad complexities and confusion surrounding the climate crisis" and its "effectiveness as a communicative act." The co-authors also cited the teenage climate activist, Greta Thunberg, who once called on her followers to "act as you would in a crisis."

The five British and one Swiss scientist admitted that all of them "have participated in, and offered support to, groups carrying out civil disobedience to press for climate action."

The six scientists brushed aside any potential criticism that they or their colleague would be abandoning impartiality by taking part in such protests. "Traditional modes of research and communication" do not meet the needs of modern times, they argued, adding that "the widespread notion that sober presentation of evidence" by a scientist to those in power would serve the best interests of humanity "is itself not a neutral perspective" but supposedly a "naive" position cementing the status quo.

"In the meantime, we have long since arrived at the point at which civil disobedience by scientists has become justified," the co-authors argued. Western nations and the UK in particular have already witnessed acts of civil disobedience in the name of protecting the climate for quite some time, with Extinction Rebellion (XR) being one of the most visible groups using such tactics.

While XR claims to be a non-violent organization, it has frequently been accused of vandalism and has clashed with police on numerous occasions. One of its co-founders, Gail Bradbrook, was arrested in the UK last year on suspicion of fraud after her movement called for "debt disobedience."