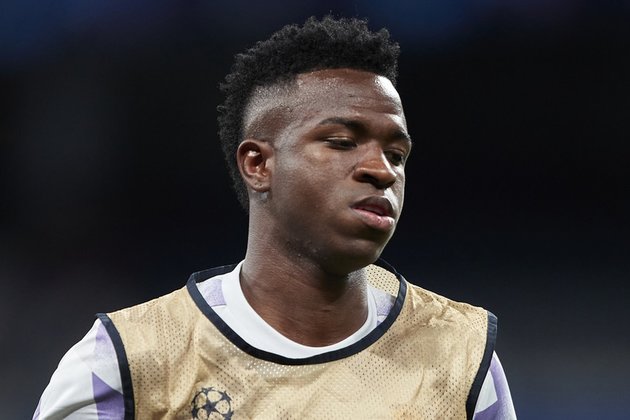 A group of fans are filmed calling Vinicius Jr a ?monkey? at the Metropolitano Stadium

Atletico Madrid fans have gone viral after a clip of them singing a racist chant aimed at Real Madrid and Brazil star Vinicius Jr was uploaded to social media ahead of the Madrid derby.

The build-up to the late-night Sunday match has been dominated by a racism row surrounding the 21-year-old, which was triggered by debate as to whether he should do his samba dancing goal celebration if finding the back of the net in the fixture.

On the El Chiringuito de Jugones program on Spanish television on Thursday night, leading agent Pedro Bravo ordered Vinicius to "dejar de ser el mono," which means 'stop clowning around' in Spanish, but can be literally translated as 'stop being a monkey.'

"Vinicius will have to respect opponents. If you want to dance, go to the Sambadrome in Brazil. In Spain you have to respect the opposition and stop clowning around," Bravo said in full.

While Bravo later apologized for his outburst and said that he had "misused" the phrase to communicate that Vinicius Jr was "doing stupid things" with his celebration, a group of Atletico Madrid fans have reignited the row, as shown in a clip shared by radio station Cope on Twitter and already been seen more than two million times.

"You are a monkey, Vinicius is a monkey," the fans, who have already been widely condemned, are seen chanting.

After receiving support from the likes of compatriot legends Pele and Neymar, Vinicius Jr released a video address on Friday night where he vowed to continue dancing.

"Weeks ago they began to criminalize my dances. Dances that are not mine," he insisted.

"Those are dances to celebrate the cultural diversity of the world. Accept it, respect it. I'm not going to stop," the Rio de Janeiro native said.

Though Atletico Madrid captain Koke warned Vinicius Jr that "there will be trouble, for sure" if he scored and danced in the derby, club president Enrique Cerezo attempted to diffuse tensions by saying he would ask Vinicius Jr to teach him how to dance samba, "because I have to go to Brazil."

"If he wants to celebrate [a goal], let him celebrate it with respect," Cerezo demanded.