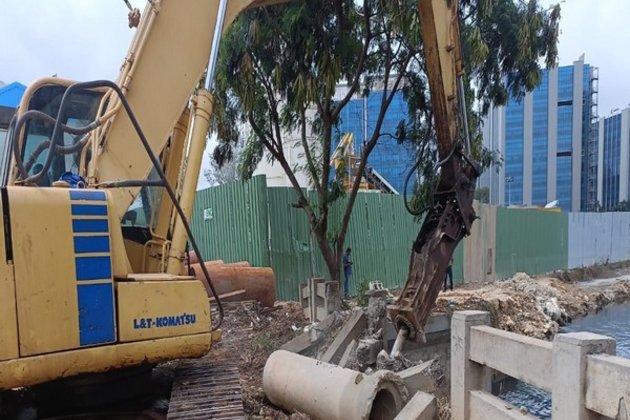 Bengaluru (Karnataka) [India], September 19 (ANI): In the aftermath of heavy rains leading to floods in Bengaluru, the demolition of apartments built illegally in different parts of the city is in full swing.

Under the jurisdiction of Bruhat Bengaluru Mahanagara Palike (BBMP), an operation to clear encroachment of royal canals has been conducted today at 5 places within the Mahadevpur zone.

In Green-Wood Residency premises, the slab installed on the 150-metre-long royal canal is going on. Also, drain work is to be done on the premises of Salar Puria and after the work is done, the compound wall of Salar Puri will be cleared.

According to the survey inside the campus of Wipro, the width of the canal is 2.4 m and nothing has been built on the canal. However, the canal has been blocked by a slab and is being cleared under the supervision of the corporation.

A 75-metre-long compound wall and 2 sheds have been cleared on both sides of Raja Canal in Vijayalakshmi Colony of Kadugodi. Also, notices have been given to 8 out of 10 houses by the people living on the Raj Canal.

About 50 metres of encroachment have been cleared and the clearance operation is in process.As many as seven buildings and four compound walls will be cleared in the Shantiniketan layout. In Papaya Reddy Layout, the apartment wall encroached by Rajkaluve and the 4 sheds built on the empty space of Rajkaluve has been cleared.

In Basavanpur, one compound wall and one empty space will be cleared and seized by the corporation.

In the satellite town of Yalahanka zone, the compound wall built by the CBS Institute encroaching on the 120-meter-long Raj Canal has been cleared by the JCB.

The evacuation operation of the encroached areas will continue in the coming days.Meanwhile, Karnataka Revenue Minister R Ashok said that all apartments built illegally on Rajakaluve in Bengaluru city will be demolished.

"By next monsoon, we've to clear all pending demolitions... all apartments will be removed, as you saw in Noida. Action to be against officialsbuilders", said R Ashok on Rajakaluve encroachment.

"30-40 IT companies have encroached the Rajakaluve in Bengaluru city and apartments will be demolished without any partiality," he added.

Three compound walls including empty space of Prestige, a compound wall of Gopalan School, and Mahaveer Apartment near Hoodi, have been cleared in the Chellaghatta area. Four compound walls and roads will be cleared near Spicy Garden (Munnekollu). (ANI)