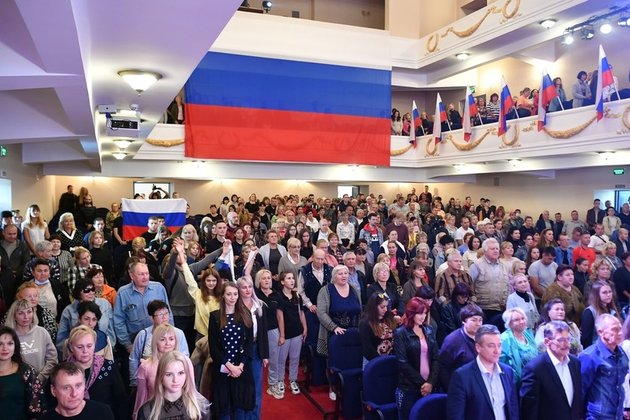 Zaporozhye Region in northeastern Ukraine will hold a referendum from 23-27 September on whether its people want to secede from the country and join Russia, the local administration's head has announced.

A petition calling on the region's military-civilian administration to hold such a vote was issued on Tuesday by a local group tasked with representing the general public. They asked the region's authorities "to immediately organize a referendum on the issue of joining our region to the Russian Federation."

"We want certainty and a stable happy future for our homeland," the civic body's head, Vladimir Rogov, said during a gathering in the city of Melitopol. "We are ready to fulfill our right for self-determination and settle once and for all the issue of the territorial status of our region."

Later in the day, Evgeny Balitsky, the head of the region's military-civilian administration, issued an order to hold a general vote as requested, scheduling it for September 23 to 27.

Rogov acknowledged that people in the Kiev-controlled part of the region were unlikely to participate under the current circumstances. Voters there would risk retaliation from the Ukrainian government if they did, he explained.

The region is split between Russian-controlled and Ukrainian-controlled parts. The latter includes the provincial capital Zaporozhye, located near the northwestern border of the region.

Earlier on Tuesday, a similar initiative was issued in Kherson Region, which is mostly controlled by Russian forces. The local administration's head, Vladimir Saldo, ordered on Tuesday to hold a general vote on whether or not to join Russia.

Saldo picked the same timeline as his counterpart in Zaporozhye Region. The same dates were announced by the leaders of the Donetsk and Lugansk People's Republics on Tuesday for their respective referendums on joining Russia.

Kiev previously stated that it would not recognize the outcome of the proposed plebiscites. The Ukrainian government threatened any would-be voters with criminal prosecution and a prison term of up to 12 years.

Russia sent troops into Ukraine on February 24, citing Kiev's failure to implement the Minsk agreements, designed to give the regions of Donetsk and Lugansk special status within the Ukrainian state. The protocols, brokered by Germany and France, were first signed in 2014. Former Ukrainian president Pyotr Poroshenko has since admitted that Kiev's main goal was to use the ceasefire to buy time and "create powerful armed forces."

In February 2022, the Kremlin recognized the Donbass republics as independent states and demanded that Ukraine officially declare itself a neutral country that will never join any Western military bloc. Kiev insists the Russian offensive was completely unprovoked.