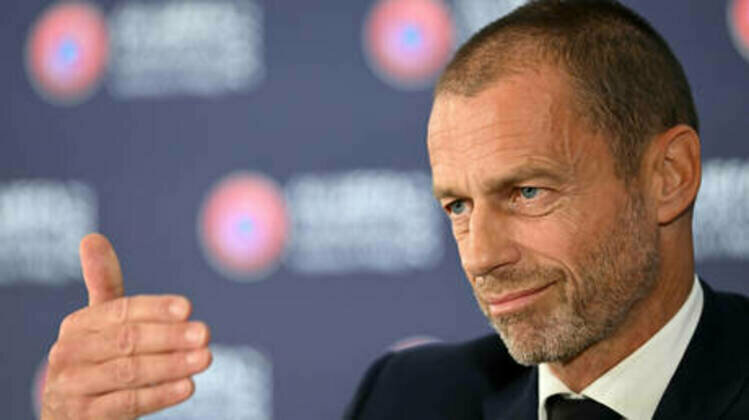 UEFA president Aleksander Ceferin has expressed hope that Russian football teams will return to international competitions as soon as possible, but defended the ban imposed on the country for Euro 2024 qualification.

UEFA confirmed on Tuesday that the Russian men's national team would not be included in the qualification draw for Euro 2024 in Frankfurt on October 9.

The decision means that Russia is effectively barred from reaching the tournament itself, which will be held across ten German cities in June and July of 2024.

UEFA and global counterpart FIFA initially issued a ban on all Russian teams back in February following the onset of Moscow's military campaign in Ukraine - sanctions which UEFA prolonged in May.

"This is not today's decision. The decision regarding Russian national and club teams and their suspension was taken 'until further notice', which means that until we decide otherwise, this will remain in place," Ceferin explained after a meeting of the UEFA Executive Committee in Hvar, Croatia.

"That means we don't have to take a decision whenever another competition comes up."

The Slovenian said his organization was hoping that the conflict in Ukraine would end "as soon as possible," and that Russia could subsequently return to UEFA competitions.

"But the situation as it is, we cannot even discuss it," added Ceferin.

It was also revealed this week that Ceferin had shared a call with Ukrainian President Vladimir Zelensky, in which the leader thanked the UEFA president "for the support of our athletes and steadfast uncompromising stand."

Prior to UEFA's confirmation that Russia would be excluded from Euro 2024 qualifying, Ukrainian Association of Football (UAF) president Andrey Pavelko had taken to social media to express his delight at the impending announcement.

"The Russians have nothing to prepare for," wrote Pavelko. "At least until 2024, they won't be at official international football competitions."

The UAF had previously called for Russia to be excluded from the qualification draw. It was also reported last weekend that UEFA had faced pressure from the interior minister of tournament hosts Germany, Nancy Faeser.

Faeser had requested that Belarus be excluded from qualification along with Russia, although UEFA continued its policy of allowing the Belarusian team to compete on the condition that 'home' matches are played at neutral venues. Belarus will be kept apart from Ukraine in the Euro 2024 draw.

Russian men's national team manager Valery Karpin said the decision on Euro 2024 had been expected, but the consequence is that his team will miss another major tournament after being ruled out of qualification for the 2022 Qatar World Cup earlier this year.

The Russian Football Union (RFU) has already had an appeal against the UEFA and FIFA bans dismissed by the Court of Arbitration for Sport (CAS) in Switzerland, but stated on Tuesday that it was considering further legal action.