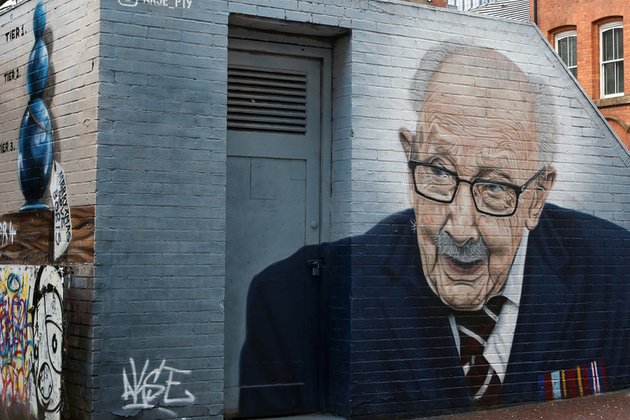 Every time a private jet takes off, it pours excrement on what Covid-19 fundraiser Captain Tom stood for, the 21-year-old said

A UK activist campaigning to "End UK Private Jets" dumped a plastic container full of what she claimed was "actual liquid human s***" over a memorial to Covid-19 fundraiser and World War II veteran Captain Tom Moore on Friday, seeking to call attention to the government's hypocrisy about climate change.

"Every time [a private jet] takes off, it pours a bucket of s*** and blood onto everything Captain Tom stood for," says Maddie Budd, described by the End UK Private Jets Twitter account as a 21-year-old "former medical student," in a video accompanying the clip of the fecal stunt.

"People are going to say that he's a hero. People are going to say that this is profoundly, obscenely disrespectful to his life and the NHS that he stood up for and I agree," she explains, questioning why "we" are "forcing our healthcare system into collapse....forcing our civilization into collapse" while "the government won't even end UK private jets!"

Not everyone appreciated the group's message, however. A Twitter user claiming to be the person who donated the Captain Tom memorial to Thistley Meadow pledged to "pursu[e] Maddie for vandalism," tweeting that he would "work with the police to ensure this is taken as far as possible." A torrent of abuse directed at Budd ensued after the story was picked up by Breitbart on Saturday.

Apparently consisting of just Budd and "Kai," 20, who uses they/them pronouns, End UK Private Jets has only existed online since July. Its site features a lengthy video of the pair discussing what they believe are the true ramifications of climate change, accompanied by grisly visuals that allegedly represent the consequences of not taking planetary warming seriously.

"In addition to death by extreme weather event, famine, disease, drought, climate change means mass starvation, mass slaughter, mass rape, and mass torture," Budd states in the video. "In terms of injustice, there really is no greater crime going on."

The campaign's Twitter account documents an earlier performance stunt in which Kai appears to have set their arm on fire in the middle of a tennis court during the Laver Cup in London. They were arrested and fined Pound 180 for "aggravated trespass."

"There's no point talking about solar panels, or cars or electric vehicles or anything like that because the government is still flying around in planes," Kai reasons in a video posted ahead of the performance, attempting to explain how setting themselves on fire would bring attention to the suffering of innocent people due to climate change.

Moore was a British Army officer who set out to raise Pound 1,000 for the NHS during the Covid-19 pandemic by walking 100 laps around his backyard. By the time he died at age 100, having tested positive for the virus, he had raised over Pound 33 million ($40 million). He was knighted by Queen Elizabeth II in a "socially distanced" ceremony after completing the fundraiser.