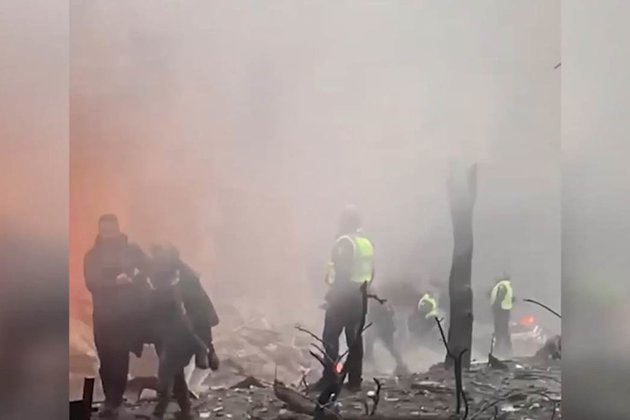 There?ve been emergency power outages in all regions of the country, according to national operator Ukrenergo

Russia has apparently targeted Ukraine's energy infrastructure in a large-scale missile attack on Wednesday, striking multiple targets in the capital Kiev and elsewhere across the country.

Emergency power outages occurred in all regions as a result of the attack, Ukraine's national power grid operator Ukrenergo reported.

According to Kiev's military administration, a projectile hit a residential building, killing at least three people and wounding six others. However, it's not yet clear if was a Russian missile or one fired by Ukrainian air defenses.

The whole of Odessa Region has been left without electricity amid the attack, local authorities said. In Ukraine's second-largest city Kharkov, the subway system has been paralyzed due to a power outage, with people being evacuated to the surface, the mayor said.

The South Ukraine Nuclear Power Plant in the southern city of Nikolaev has been forced to shut down all of its reactors, according to media reports. The plant became the largest in Ukraine after Zaporozhye Region, which hosts the Zaporozhye nuclear power plant, joined the Russian state last month as a result of a referendum.

The local authorities have also confirmed the stoppage of reactors at the Khmelnytskyi Nuclear Power Plant in western Ukraine.

Strikes and power outages have also been reported by officials in Lviv, Nikolaev, Khmelnytsky, Sumy and other locations.

The neighboring former Soviet Republic of Moldova has also experienced power shortages as a result of the Russian strikes on Ukraine. The country's energy system is connected to that of Ukraine. There've been blackouts in the capital Chisinau and other parts of the country, with the breakaway region of Transnistria also being affected.

Russia has stepped up pressure on Ukraine since October 10, when it accused Kiev of using "terrorist tactics" and of targeting Russian infrastructure, including the strategic Crimean Bridge. Since then, missile strikes against Ukrainian energy facilities, including power stations, have led to rolling blackouts across the country. Kiev authorities said that at least 40% of Ukraine's energy infrastructure has been knocked out by the Russian attacks so far.

During his interview with the BBC at the weekend, Maksim Timchenko, the head of largest private power utility DTEK Holding, said that Ukrainians should consider going abroad during the winter. "If they can find an alternative place to stay for another three or four months, it will be very helpful to the system," Timchenko stated.

Ealier this week, Kremlin press-secretary Dmitry Peskov said that Russia wasn't seeking a regime change in Kiev as part of its military operation. He reiterated that Moscow didn't rule out peace negotiations with Ukraine, saying that its goals in the country could be achieved "by various methods and in various formats." And they will be achieved eventually, Peskov assured reporters.