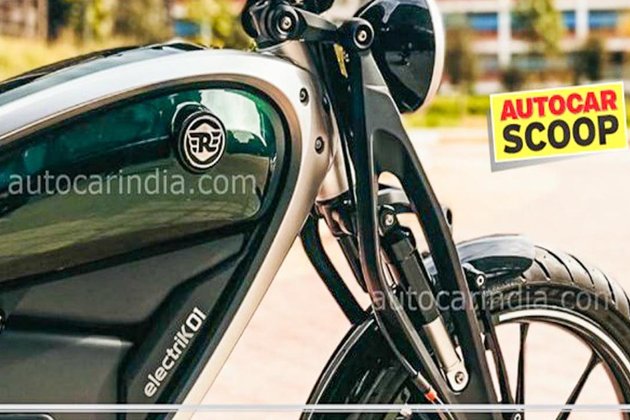 Holy Moly! That was the expression that struck my mind when I first laid my eyes on this beauty. Eicher Motors CEO Siddhartha Lal had given subtle hints at Hunter 350 launch event as to what kind of EVs may come out of Royal Enfield stables in the coming years. He mentioned that the very first Royal Enfield electric vehicle will be revealed in a few years.

We knew that RE was cooking something that had nothing to do with IC engines. Now, the first photo of their first electric motorcycle has leaked online. What we see is so radical, it has managed to take us back in time. This is unlike anything that has come out of Royal Enfield stables in decades.

The motorcycle in question is Royal Enfield's maiden electric product. It is internally codenamed "Electrik01", and hints at the possibility that there might be future versions of this concept. Even though this isn't a full reveal, we can get a hold of what aesthetics Royal Enfield is going for. For starters, the main eye-grabber is its front girder fork which is ancient technology in today's standards.

To put it into context as to how old that is, I am an Automobile Engineer and I never once read about it throughout my degree. Since I am a vintage car and vintage motorcycle enthusiast, I am aware of such relics. It consists of two girder arms that hold either side of the wheel. There is a top dogbone that connects this fork to the motorcycle's frame.

Since there is only one link, it was considered as ineffective as motorcycles went faster around the corners. Telescopic forks have the advantage of providing twice the clamping and rigidity. Today, USD forks are regarded as better because they pose a major advantage in corner carving as the fatter part is up top and offers more surface area for clamping and hence, sharper handling.

This type of setup usually only gets one spring and damper. But on Electrik01, there seem to be two forks. We don't see any provision for adjusting the dampers either. Sticking with Royal Enfield's maiden electric bike, the report further states that 'non-conformist', 'game changer' and 'lone wolf' were present in its product brief. It is likely that RE will stick with conventional setups to share parts with multiple products. Or embrace girder forks too.

Despite being an electric vehicle, Electrik01 gets a fuel tank which is likely to be purely aesthetic. This is an indication that RE will stick to its roots and offer a retro-styled or a neo-retro-styled motorcycle. Elements like round headlight, minimalist speedo and curvaceous lines are present on Electrik01. This concept gets a futuristic chassis and production-spec vehicles will likely sport a conventional chassis.

Looking at the timeframe that the British brand generally takes to launch one of its products, it is safe to say that Royal Enfield's maiden electric bike is still years down the line. Since it is their maiden EV, that timeframe is likely to go even further. Royal Enfield is in no hurry and will take their own sweet sweet time to roll out an EV that will be good, and also meet expectations.