US Warns Turkish Offensive Endangering US Troops in Syria 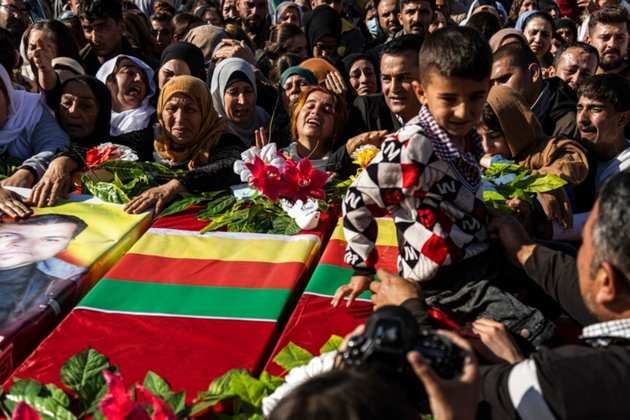 U.S. Central Command, which oversees the approximately 900 U.S. troops in Syria tasked with countering the Islamic State terror group, said Wednesday that at least one of the airstrikes, against a counterterrorism base in the country's northeast, did endanger U.S. forces.

"We have received additional information that there was a risk to U.S. troops and personnel,' CENTCOM spokesman Colonel Joe Buccino said in a statement shared with VOA.

"These actions threaten our shared goals, including the continued fight against ISIS to ensure the group can never resurge and threaten the region," he added, using another acronym for IS.

CENTCOM officials have so far declined to provide additional information about the incident Tuesday, which targeted a base near Hasakah used both by the U.S. and by U.S.-backed Syrian Democratic Forces.

In its initial assessment on Tuesday, CENTCOM had said no U.S. forces were at the base at the time of the airstrike, although it criticized the Turkish airstrikes in general, saying such actions "do place U.S. troops operating in Syria to defeat ISIS at risk.'

An SDF spokesman told VOA on Wednesday that U.S. troops had been at the base just five days earlier, doing some aerial surveillance of the area.

The U.S. revelation that the Turkish airstrike might have directly endangered U.S. personnel followed repeated calls by U.S. officials for Turkey and the Syrian Kurds to pull back.

"We continue to urge for de-escalation on all sides. ... (T)hese strikes from all sides risk our mission, which is to defeat ISIS," Pentagon deputy press secretary Sabrina Singh said Tuesday, responding to a question from VOA.

On Wednesday, the U.S. chairman of the Joint Chiefs of Staff, General Mark Milley, spoke by phone with his Turkish counterpart, emphasizing the need to maintain communications.

Turkey launched its most recent offensive against the Syrian Kurds this past week, blaming them for a November 13 bombing in Istanbul that killed at least eight people and injured dozens more.

While the U.S. views the Kurdish-led SDF as a key ally in the fight against IS and as separate from the YPG, Ankara views the SDF and YPG as a single organization, arguing many fighters belong to both groups.

"Turkey does continue to suffer a legitimate terrorist threat, particularly to their south," John Kirby, the National Security Council's coordinator for strategic communications, told reporters Tuesday. "They certainly have every right to defend themselves and their citizens."

But Kirby emphasized Washington's concerns that Turkish offensive, in the long run, will do more harm than good.

"It might force a reaction by some of our SDF partners that would limit, constrain their ability to continue to fight against ISIS ... it's still viable as a threat," he said.

The SDF told VOA on Wednesday that those fears were already starting to play out.

SDF spokesman Farhad Shami said Turkey launched five airstrikes against security forces guarding IS families at the al-Hol displaced-persons camp in northeast Syria, allowing some of the families to escape.

The SDF also accused Turkey on Wednesday of targeting civilian infrastructure, including homes, hospitals and schools, killing at least 15 civilians, since the start of its offensive on November 19.

Turkish officials have said the offensive has killed 184 militants, and Turkish President Recep Tayyip Erdogan signaled Wednesday that he was preparing to intensify efforts against the Syrian Kurds.

"While we press ahead with air raids uninterrupted, we will crack down on terrorists also by land at the most convenient time for us," Erdogan said during a speech to members of parliament.

"Turkey has the power to identify, catch and punish terrorists who are involved in attacks against our country and nation, and those helping them, inside and outside our borders," he said.