Turkish Airstrike Hits 300 Meters From US Forces in Syria 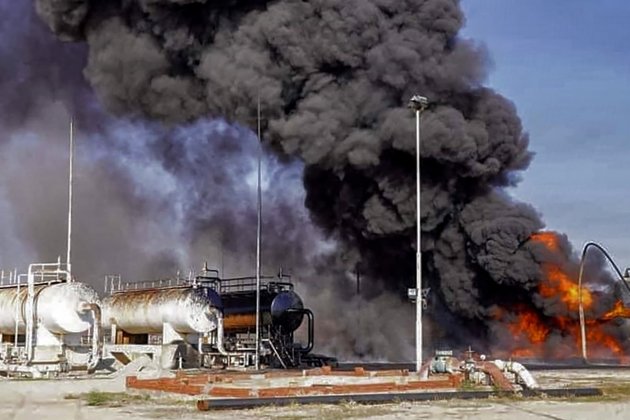 U.S. Central Command, which oversees the approximately 900 U.S. troops in Syria tasked with countering the Islamic State terror group, first acknowledged the strike Tuesday, saying no U.S. personnel were at the base at the time.

But a U.S. defense official told VOA late Wednesday that U.S. troops were nearby, just 300 meters away from the base, located north of the city of Hasaka.

A source close to the leadership of the U.S.-backed Syrian Democratic Forces, or SDF, further told VOA that the base is part of a larger compound and that U.S. forces were in a different building that is not part of the base itself.

'We have received additional information that there was a risk to U.S. troops and personnel,' CENTCOM spokesman Colonel Joe Buccino said in a statement shared with VOA.

'These actions threaten our shared goals, including the continued fight against ISIS to ensure the group can never resurge and threaten the region,' he added, using another acronym for Islamic State. SDF officials said Tuesday's airstrike killed two U.S.-trained members of its counterterrorism forces.

An SDF spokesman told VOA Wednesday that U.S. troops had been at the base just five days earlier, doing some aerial surveillance of the area.

The U.S. revelation that the Turkish airstrike might have directly endangered U.S. personnel follows repeated calls by U.S. officials for Turkey and the Syrian Kurds to pull back.

'We continue to urge for de-escalation on all sides and in our conversations, and what we have said publicly is that these strikes from all sides risk our mission, which is to defeat ISIS,' Pentagon deputy press secretary Sabrina Singh said Tuesday, responding to a question from VOA.

On Wednesday, the U.S. chairman of the Joint Chiefs of Staff, General Mark Milley, spoke by phone with his Turkish counterpart, emphasizing the need to maintain communications.

Turkey launched its most recent offensive, Operation Claw-Sword, against the Syrian Kurds this past week, blaming them for a November 13 bombing in Istanbul that killed at least eight people and injured dozens more.

While the U.S. views the Kurdish-led SDF as a key ally in the fight against IS and as separate from the YPG, Ankara views the SDF and YPG as a single organization, arguing many fighters belong to both groups.

'Turkey does continue to suffer a legitimate terrorist threat, particularly to their south,' John Kirby, the National Security Council's coordinator for strategic communications, told reporters Tuesday. 'They certainly have every right to defend themselves and their citizens.'

But Kirby emphasized Washington's concerns that the Turkish offensive, in the long run, will do more harm than good.

'It might force a reaction by some of our SDF partners that would limit, constrain their ability to continue to fight against ISIS. ... It's still viable as a threat,' he said.

The SDF told VOA Wednesday those fears are already starting to play out.

'Due to our forces' preoccupation with addressing the Turkish occupation, they cannot continue their mission of pursuing ISIS cells,' SDF Commander Mazloum Abdi said in a statement shared with VOA.

'Currently, we're forced to be preoccupied with confronting Turkish aggression,' he added.

Other SDF officials speaking with VOA emphasized the change in posture should not be viewed as a policy decision or as a cessation of anti-IS operations, explaining they have no choice but to prioritize defending themselves against Turkish airstrikes and a possible Turkish ground assault.

The SDF also accused Turkey of boosting IS with its actions.

SDF spokesman Farhad Shami told VOA that Turkey launched five airstrikes against the security forces guarding IS families at the al-Hol displaced persons camp in northeast Syria Wednesday, allowing some of the families to escape.

He said six individuals, including three women, have been recaptured.

The SDF additionally accused Turkey of targeting civilian infrastructure, including homes, hospitals and schools, and killing at least 15 civilians since the start of its offensive Saturday.

'It is the PKK/YPG terrorist organization that have long hampered civilian infrastructure across Syria as well as in Türkiye,' Turkish Embassy officials in Washington told VOA in a statement, accusing Syrian Kurdish forces of targeting civilians themselves.

'The PKK/YPG carried out from Syria another round of cross-border rocket and mortar attacks, indiscriminately targeting schools, kindergartens as well as residential areas, resulting in civilian casualties, including teachers and pupils,' the Turkish officials wrote, further accusing the group of collaborating with IS 'to stage attacks in the west of Euphrates against Syrians.'

Turkey has said its offensive has so far killed 184 militants, and Turkish President Recep Tayyip Erdogan on Wednesday signaled he was preparing to intensify efforts against the Syrian Kurds.

'While we press ahead with air raids uninterrupted, we will crack down on terrorists also by land at the most convenient time for us,' Erdogan said during a speech to members of parliament.

'Turkey has the power to identify, catch and punish terrorists who are involved in attacks against our country and nation, and those helping them, inside and outside our borders,' he said.