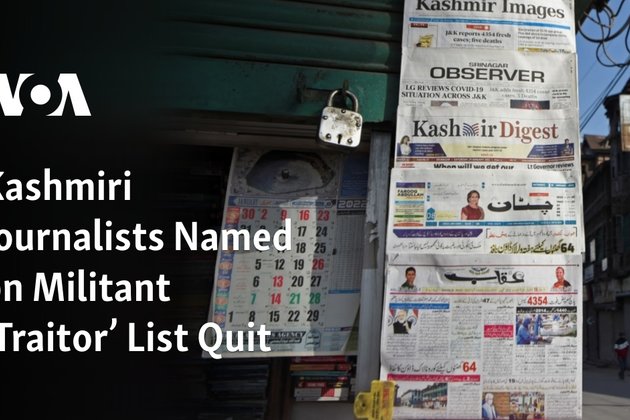 SRINAGAR, INDIA - Collaborator. Stooge. Traitor. These are the terms a militant group used to describe a dozen journalists in Indian-controlled Kashmir, in a list published online.

The list published on a blog linked to the militant group Lashkar-e-Taiba (LeT) and its affiliate, The Resistance Front (TRF), had an immediate effect. At least five of the journalists named publicly announced they are quitting their jobs.

Journalists and media analysts say the list underscores the dangers for Kashmiri media professionals, who risk being attacked or threatened from extremist groups on one side and accused by authorities of supporting or promoting terrorism on the other.

The pressure on journalists in the disputed region has only increased since India revoked Kashmir's special status granting it autonomy in 2019.

"You have a situation where extra-territorial militant interests now find it easy to issue intimidatory threats to established newspapers based in the region and declare them as collaborators of the Indian government," Pamela Philipose, public editor at the Indian news website The Wire, told VOA.

A female journalist in Kashmir, who spoke on condition of anonymity, told VOA, "It's very tough to be honest. It consistently makes one overthink about the situation."

The list of journalists was published on Kashmir Fight, a blog believed to be run or affiliated with Lashkar-e-Taiba, which is listed by India and others as a terrorist group.

Access to the blog is blocked in Kashmir, but screenshots have been shared widely online.

A version viewed by VOA shows the names and accusations leveled against 12 journalists, along with initials of their news outlet. The text reads, "They are already listed and their time/fate sealed."

Since then, at least five journalists, including from the English-language daily Rising Kashmir and the ANN News media agency, have resigned.

Some posted their resignations via Twitter, including one who announced he was quitting as a cameraman and disassociating himself from his former media outlet.

Map of the Line of control, Kashmir

Anuradha Bhasin, executive editor of Kashmir Times, said, "Journalists are certainly accountable to their readers, but not to a band of cowards cowering behind a shady blog and announcing death threats. This is pathetic and condemnable."

Bhasin and the DIGIPUB News India Foundation, a trade body of digital media organizations, both said in social media posts that journalists in the region face pressure from both militants and authorities.

Police in the city of Srinagar are investigating the threat.

In a statement, the police said a case has been registered against suspected members of "LeT & its offshoot TRF for online publication & dissemination of a direct threat letter to journalists (and) reporters based in Kashmir."

As part of that investigation, police on Saturday carried out raids, including at the homes of six journalists and of lawyers who represent people accused of militancy. One former journalist, Sajad Ahmad Kralyari, was detained for questioning and his cellphone and laptop seized, the Reuters news agency reported.

An unnamed police official told Reuters that police conducted searches at 10 locations "in connection with the investigation of the case related to recent threats to journalists."

Police in Kashmir did not respond to a VOA email requesting further comment and detail on the investigation, including what led to the raid on journalists' homes.

Philipose of The Wire said that the capacity of the Kashmiri media to stand up to the challenge of reporting difficult stories in a climate awash with mistrust, fear, and repression has been steadily undermined.

She said that journalists in the region have said they feel numb. "It is tragic the situation in which they are now forced to function," she said.

Manoj Joshi, a fellow at the Delhi-based group the Observer Research Foundation, told VOA via email, "Militants have always posed risks to the media, but so does any over-reaction on the part of the authorities."

Joshi said that the risks "have not been as high as in other conflict zones," and that he found the police raids "troubling."

Since the revocation of Article 370, which had granted the region autonomy, Kashmir has seen internet and communication blocks and restrictions, and journalists have been detained or questioned for alleged national security violations.

"We have no idea what's happening with journalists whose homes have been raided. There is absolutely no communication. Obviously, this all is very threatening and working around such pressures is not easy," the anonymous female journalist said.

Speaking about the raids Saturday, Philipose said that the Kashmir police seemed less interested in creating a climate that enables journalists to do their work.

Instead, she said, they launched "raids on several local journalists, holding them responsible for these threats."

The threat from militants led some in Kashmir to cite the need for the region's press club to be reopened. The club closed in January when authorities revoked its license to operate.