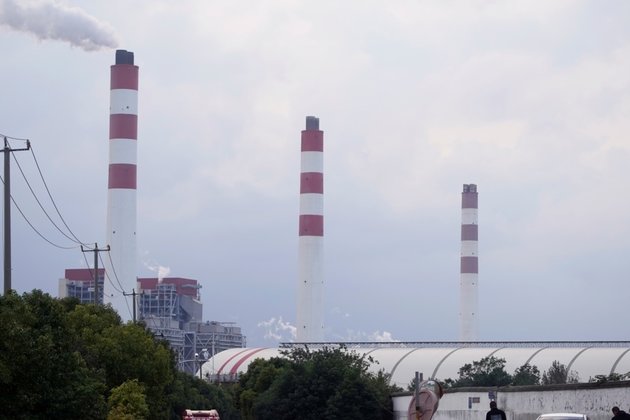 Berlin - The projected drop in carbon emissions in China because of its slowed economic growth due to pandemic lockdowns - shown in a report released at the recent COP27 - is likely short-lived, experts have told VOA.

China is still imposing lockdowns in COVID-stricken cities under its 'zero-COVID policy," to which Chinese President Xi Jinping reaffirmed his commitment at the 20th Party Congress in October.

The COVID-related tourism slowdown and industry production curbs led to a reduction of over 930 metric tons of carbons in the first half of 2020 alone, equivalent to 11% of China's total carbon emissions in 2019, a study released this year showed. In the second quarter this year, the country's carbon emissions plummeted a record 8% year-on-year, according to an analysis by Carbon Brief, a British website covering climate and energy issues.

However, the drop in carbon emissions from COVID lockdowns will not last, said Alex Lo, senior lecturer in climate change at the Victoria University of Wellington.

"Lockdowns will still have short-term impact on emissions. ... But if we step back and look at the big picture, it's [the zero COVID policy] goes beyond lockdown. It's affecting investment confidence," Lo told VOA by video call this week.

"Investment is important here, and it's not just about investment in those emissions-intensive industry, but also the investment in renewable energy, which is a substitute to fossil fuel," he said.

On a coal spree

He predicted that the investment in China's capacity in renewable energy generation might go down in the next two to three years. With that, Lo said, local governments could have the tendency to return to coal as a stable energy source, despite China's pledge to slash its share in the nation's energy mix and eventually phase down coal consumption in 2026.

China's coal output hit a record high in March, and a few months later, it was also seen to ramp up its coal supply to cope with the most severe heatwaves in decades. In October, China again boosted its coal supply for winter heating. Currently, half of the country's energy has been generated by burning coal.

Lauri Myllyvirta, lead analyst at the Centre for Research on Energy and Clean Air, has an even grimmer view on coal consumption in China amid COVID lockdowns.

"Coal consumption in fact increased sharply during late 2020 and early 2021 with the lockdowns, as the government used construction and industrial production to offset the economic impact," he told VOA by email this week.

"Relaxation of COVID-19 controls, if it happens, would have a major impact on oil consumption but much less of an impact, if any, on coal consumption," he said.

He added that if China's COVID lockdowns continue, Beijing's economic policy to cushion an economic fall would determine the country's carbon emissions.

"If real estate easing and a ramp up of low value infrastructure projects becomes the answer, then that would lead to another jump in emissions," Myllyvirta said.

Daniel Wetzel, head of tracking sustainable transitions unit at the International Energy Agency, on the other hand, predicted that China's coal use uptick could be temporary.

"Even though we're seeing a short-term return to coal, and this is very short-lived, by 2025, coal is set to decline globally by 2030," Wetzel told VOA by video call.

The need to boost renewables

However, he agreed that the drop in carbon emissions from lockdown is "not durable," and said China should focus on transition from fossil fuel to cleaner sources of energy.

"What we actually need to be seeing is the systematic changes in shifting away people from using internal combustion engines towards electric vehicles, shifting away from coal to renewables," he said.

A report from financial analysis firm S&P Global said China could "comfortably exceed" its current target of 33% for energy consumption in 2025, as the official figure for 2021 already reached close to 30%.

Wetzel added that China has the ability to double down on boosting its renewable supply.

"There's more opportunity [for China] to move above its current targets for renewables, given that year-on-year, they've already surpassed historic targets," Wetzel said.