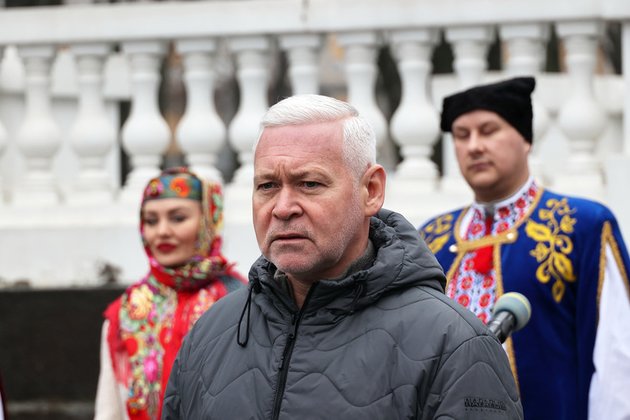 Kiev has slapped the mayor of Ukraine's second largest city, Kharkov, with a fine for using what the authorities called a "non-state" language in an official TV address. Mayor Igor Terekhov is known for addressing his fellow residents in Russian.

Terekhov will have to pay a fine of 3,400 hryvnas ($92) for violating Ukrainian law, Taras Kremin, the Ukrainian government's commissioner for the protection of the state language, said in a statement on Thursday.

The mayor had "used non-state language in his addresses to the residents of the city of Kharkov" during a news telethon, the statement read, calling this an "administrative offense." The language commissioner's office also issued an administrative warning to the mayor's office, telling it to only use Ukrainian on the mayor's social media pages.

Terekhov has until December 4 to appeal the commissioner's decision, the statement read. The Ukrainian authorities did not specify what language the mayor had used during the telethon, but the Ukrainian media reported that he was known for regularly addressing his fellow residents in Russian.

According to the language commissioner's office, Terekhov and some Kharkov city council members have already been found in violation of the state language law. It is unclear if they were sanctioned back then as well.

The Ukrainian state language law was signed by then-President Pyotr Poroshenko back in 2019, five days before his presidential mandate expired. The legislation requires Ukrainian public officials to use only the Ukrainian language when discharging their duties.

Ukrainians are also required to use the Ukrainian language in the fields of public services, medical care, education and science, as well as in the media, although certain exceptions are allowed. A person found in violation of this law might face a fine of up to 8,500 hryvnas ($230), which can be further doubled for a repeated offense.

In mid-June, the language commissioner was granted the right to impose fines on those found in violation of the law. In October, an assistant professor at the Ukrainian National Aviation University was slapped with a fine of 3,400 hryvnas ($92) for teaching through a "non-state language."