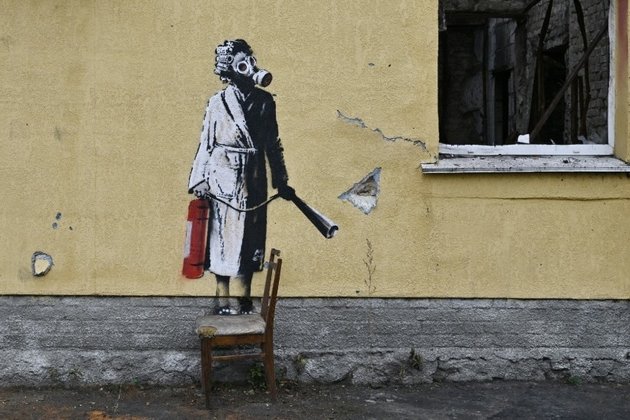 The graffiti has been cut from a wall in the city of Gostomel, both local newspaper and social media users have alleged

An artwork by mysterious street artist Banksy disappeared from a wall at an apartment block in the Ukrainian city of Gostomel on Friday, the police have confirmed to a local media outlet.

Seven graffiti, which resembled Banksy's style and decried the conflict between Russia and Ukraine, popped up in Kiev and nearby locations, including Gostomel, in early November. The iconic artist, whose identity remains unknown to this day, later confirmed to the media that the works were indeed his. They are his first public murals after almost a year of silence.

The artwork in Gostomel depicted a woman in a gas mask and a bathing gown, and holding a fire extinguisher in her hands. She was standing on an actual wooden chair, which had been attached to the wall.

However, locals reported on social media earlier in the day that the mural was gone and posted images with an empty wall at the spot where it used to be. The graffiti had been drawn on a piece of thermal insulation and this was cut out by the perpetrators.

Police in Gostomel confirmed the incident to news website Ukrainska Pravda, saying that a group of men had been detained in the city on suspicion of vandalism. They said the suspects explained during interrogation that they wanted to sell the mural and donate the money towards the needs of the Ukrainian armed forces.

A criminal case on 'Deliberate destruction or damage to property' has been launched against the men. According to Ukraine's criminal code, the violation can be punished by a fine, correctional work or a prison term of up to three years.

Banksy is a high-priced artist, with his work 'Love is in the Bin,' for example, fetching Pound 18.58 million ($22.69 million) at Sothbey's last year.