Jyotiraditya Scindia flags off direct flights between Pune and Singapore 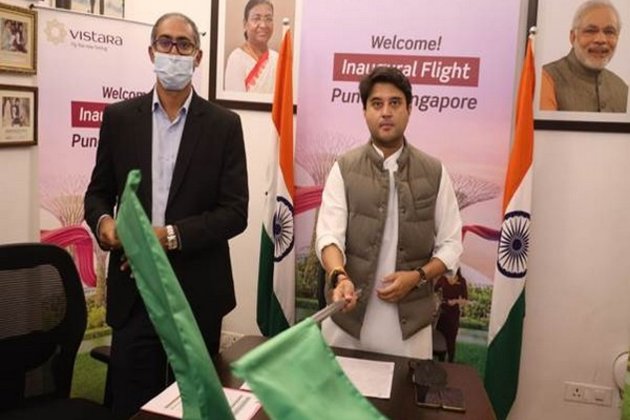 "The city of Pune, with its rich historical and cultural heritage, is constantly growing to become a hub for innovation, education, and development. Giving an impetus to this growth, the government has planned a gamut of activities to increase Pune's connectivity, such as enhancing connectivity to domestic and international locations, developing a new terminal, and providing infrastructural support to the city by providing a separate cargo terminal," Scindia said, speaking at his inaugural address on Friday.

The Vistara flight which started from 2nd December will operate on Monday, Wednesday, Friday and Sunday. The flight will depart from Pune at 2:10 and arrive in Singapore at 10:30. The departure time from Singapore has been scheduled for 11:50 while the flight will arrive in Pune at 15:10 hrs. Tata Group-owned Vistara will operate Airbus 320 neo aircraft on the route.

The Minister further added that the initiation of the Pune - Singapore flight is an important landmark in the history of Pune.

He also mentioned the newly launched flight route between Pune and Bangkok and said that these two routes would not just connect the city to important global destinations but also provide an edge to the development of the city by linking it to a wide range of opportunities related to employment, education, trade, and business.

According to the Ministry of Civil Aviation, looking at its increasing capacity, the new terminal is being built with a cost of Rs. 475.39 Cr and will expand its current area from 22,500 square meters to 48,500 square meters. To boost exports from Pune, a new International Air Cargo Terminal is also being built which will be completed by December 2024. A newly built multi-level parking facility worth Rs 120 crores was recently launched on November 25, 2022, at the Pune Airport.

Vice-Consul, Consul General of the Republic of Singapore, Gavin Roch, and Director General of MCCIA Prashant Girbane were among the others who were presented during the inauguration. (ANI)