"They have a habit of lying": BJP's Parvesh Verma attacks AAP, as Delhiites vote for MCD 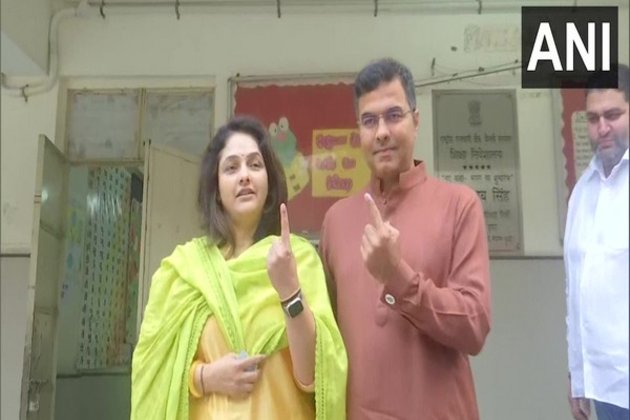 New Delhi [India], December 4 (ANI): Bharatiya Janata Party (BJP) MP Parvesh Verma on Sunday attacked the Aam Aadmi Party by stating that it has a "habit of lying" and exuded confidence that they will get more than 80 per seats in the ongoing Municipal Corporation of Delhi (MCD) elections.

"AAP was claiming to form government in Goa, Uttarakhand and Uttar Pradesh but people know that they have a habit of lying. During the COVID, no one from AAP was seen working for the people. Only MCD workers were standing with them," Parvesh Verma said after casting his vote along with his wife at a polling booth in Matiala village.

He further said that the party will get around 210 seats in the currently underway polls.

Delhi witnessed high-decibel campaigning by AAP and BJP which made top leaders, includingUnion ministers, chief ministers of BJP-ruled states, and the MPs hit the streets for door-to-door campaigning and meetings to garner public support.

The counting of votes will take place on December 7.

The Commission said it has made elaborate arrangements for a "safe, secure and pleasant" voting experience. These measures are required to keep the electoral field free and to ensure that a level playing field is afforded to all political parties and candidates.

Delhi Police is working round-the-clock to ensure the peaceful and orderly conduct of the polls.This is the first civic election after the fresh delimitation exercise. There were 272 wards in Delhi and three corporations- NDMC, SDMC, and EDMC in Delhi from 2012-2022 that later reunified into an MCD that had formally come into existence on May 22. (ANI)