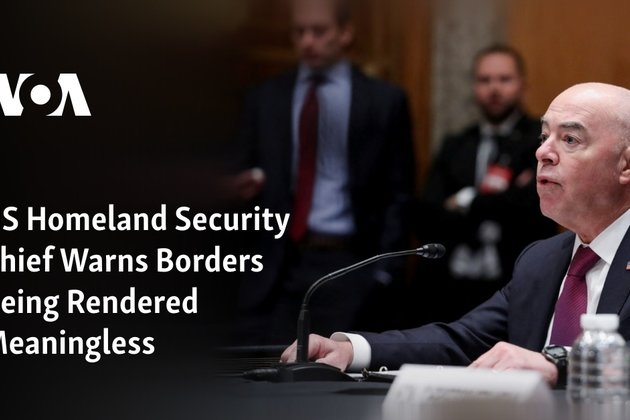 Washington - America's borders - and borders in general - are no longer sufficient to help protect the United States from a variety of evolving threats, including foreign wars, according to a grim assessment by the country's top Homeland Security official.

Speaking less than a week after the Department of Homeland Security reissued a National Terrorism Advisory System bulletin because of a 'persistent threat environment,' Secretary Alejandro Mayorkas warned that U.S. adversaries and criminal actors have leveraged technological advances to reach inside the country in ways that until now have never been possible.

'We face a new kind of warfare, no longer constrained by borders or military maneuvers,' Mayorkas told an audience at the Center for Strategic and International Studies in Washington.

'Ubiquitous cutting-edge technologies, economic and political instability, and our globalized economy, have erased borders and increasingly bring threats and challenges directly into our communities,' he added. 'Our homeland security has converged with our broader national security.'

Mayorkas pointed to the June 2017 NotPetya cyberattack, launched by Russia against Ukraine but which quickly spread to impact businesses across Europe and the U.S., as well as some U.S. health care providers, as an example.

And while the NotPetya attack may not have intentionally put the U.S. in its sights, countries like Russia and China have been quick to learn its lessons.

'Those who wish to harm us exploit the openness that defines our modern world,' Mayorkas said. 'They do so through trade and investment flows, through the rapidly evolving technologies that connect us, and through information spread around the world by the click of a mouse.'

Mayorkas identified Russia and China as the biggest threats, warning both have a wide array of tools and the political will to inflict damage on the U.S.

China, Mayorkas said, is 'leveraging its instruments of national power to undermine the security of our critical infrastructure, to gain access to our technology and data to assault human rights and undercut American workers and businesses.'

Neither Russia nor China responded immediately to requests for comment.

FBI Director Christopher Wray told an audience at the University of Michigan last week that China 'has a bigger hacking program than that of every other major nation combined' and that 'the Chinese government has stolen more of American's personal and corporate data than that of every nation, big or small combined.'

FBI Says It has 'National Security Concerns' About TikTok

And this past Saturday, U.S. Director of National Intelligence Avril Haines told the Reagan National Defense Forum that Americans should be worried about using Chinese social media apps, like TikTok.

'It's extraordinary the degree to which China in particular, but they're not the only ones obviously, are developing frameworks for collecting foreign data and pulling it in, and in their capacity to then turn that around and use it to target audiences for information campaigns or for other things,' Haines said.

Other senior U.S. cyber officials have also called attention to the dangers posed by Iranian and North Korean hackers, sometimes working at the behest of their respective governments, to inflict damage on the U.S. homeland.

North Korea has long denied any involvement in ransomware attacks against U.S. companies and organizations. Iran has not responded to past VOA requests for comment on the allegations.

US Rolls Out Voluntary Cybersecurity Goals

Mayorkas, though, warned that the ability of U.S. adversaries to erase borders extends beyond the cyber realm, with various Homeland Security agencies 'waging the fight against transnational criminal organizations on an unprecedented scale.'

He also called for more sophisticated passenger screening for airplanes, citing ever more dynamic and complex threat from foreign and domestic terrorist groups.

Mayorkas said other top concerns include the 'gravity and frequency' of extreme weather events in the United States, and a broken immigration system.

'We are seeing migration that is unprecedented in scope ... around the world,' he added.