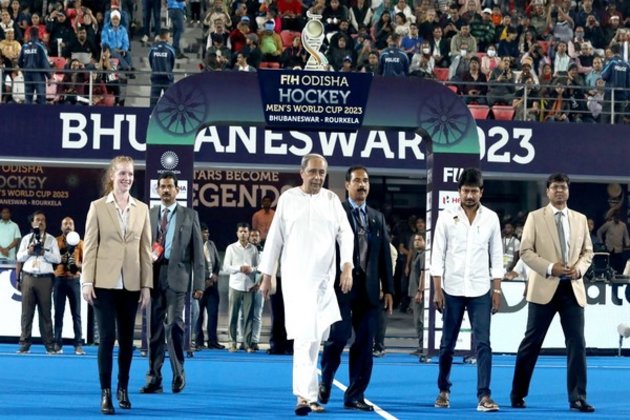 Bhubaneswar (Odisha)[India], January 23 (ANI): Hockey fans from all over the world have converged in the state of Odisha, abuzz with anticipation for the FIH Hockey World Cup 2023, and they have not been disappointed. The state government along with the Bhubaneswar Development Authority has spared no effort, curating a truly memorable experience for the fans. "There is a lot of craze for hockey in Odisha and that is exactly the reason why honourable Chief Minister Naveen Patnaik wanted this World Cup to be done after successfully conducting the 2018 Hockey WC and in this edition of the world cup the main extra thing done in terms of two venues one in terms of Bhubaneswar and second in terms of Rourkela," said R Vineel Krishna, Commissioner-cum-Secretary of the Odisha government.

The Birsa Munda Stadium in Rourkela, which hosted India's first two pool stage matches, has the highest number of seating capacity for fans in hockey. To welcome the fans, both the cities of Bhubaneswar and Rourkela have commissioned a host of cultural events showcasing the best of the city. These experiences have been crafted around four pillars, food, entertainment, storytelling and trails. Visitors can immerse themselves in performances from local musicians, story tellers, and dance troupes.

"The World's largest all seater in terms of spectators. And also the Chief Minister wanted to engage everybody in this World Cup and therefore the activities happening across the state. The trophy tour has gone across many states and countries as well. You can see the stadiums are full and response that is there from spectators especially in places like Rourkela shows how much people are connected to hockey and what a glorious future it will have in coming years," R.Vineel Krishna, IAS, Commissioner-cum-Secretary, Odisha government," Krishna added.

In addition to these cultural offerings, the city has commissioned numerous initiatives to further beautify the city. Flyovers have been etched with vibrant murals, sculptures have been erected in public spaces, and new greenery has been planted throughout the city. The result is a city that looks festive, warm and welcoming.

"Rourkela stadium is the heartland of our hockey in Odisha and the area has produced at least 60-70 hockey players and many of them were captains of both men's team and also the women's team. Therefore, the crazy for that area in hockey is very good and that is reflected in CM's vision for creating world class infrastructure during that area and also the kind of coaching programmes are done separately. Each of the blocks have the hockey training centre in the synthetic turf. So, it is not only about the big stadiums that have come up. The ecosystem of hockey that is being developed and conducting the World Cup is part of the entire planning to inspire the budding hockey players to dream big and represent the country," Krishna said.

"Absolutely the best hockey stadiums are in Odisha. Kalinga Stadium in Bhubaneswar and Birsa Munda Stadium in Rourkela and there is so much interest nationally and internationally to come and watch the matches and experience," he added.

The result is a city that looks festive, warm and welcoming. Even the players and coaches, who are flooded with the spirit of competition at a high stakes tournament like the World Cup are not immune to the festive atmosphere that has been conjured around them.(ANI)