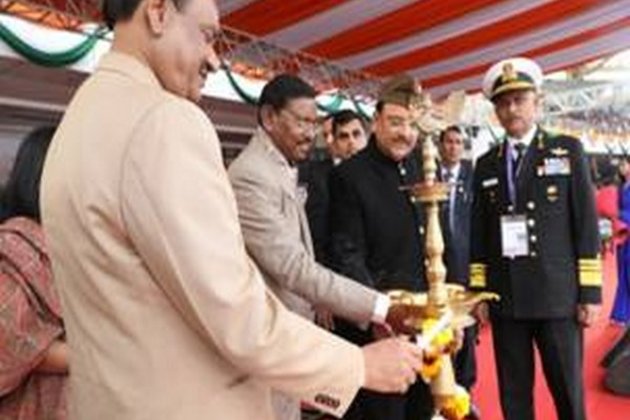 New Delhi [India], January 24 (ANI): The Ministry of Tribal Affairs, in collaboration with the Ministry of Defence, with the Indian Coast Guard as the coordinating agency, celebrated the first day of 'Adi Shaurya - Parv Parakram Ka' with a colourful show of tribal dances and performances by armed forces to mark the 126th birth anniversary of Netaji Subhash Chandra Bose (Parakram Diwas) today at the Jawaharlal Nehru Stadium in New Delhi in the presence of thousands of people.

On the remarkable occasion, Om Birla, Speaker of the Lok Sabha, Arjun Munda, Union Minister of Tribal Affairs, and Ajay Bhatt, Minister of State of Defence and Tourism, inaugurated the festival by lighting the ceremonial lamp and ringing the dong to commence the festival, said a press release.

Adi Shaurya displayed excitement, energy, and enthusiasm through a kaleidoscope of nail-biting military performances and tribal dances, representing the diversity of India herself, added the press release.

During the event, Arjun Munda, Union Minister of Tribal Affairs remarked, "Just as tribals value 'Jal, Jangal, Jameen', our armed forces fortify our borders and protect our country's assets, tribal communities and their heritage. The festival pays homage to the symbiotic relationship between the armed forces and the tribal citizens."He added "Tribal people are not only protectors of nature, environment, and culture, they also play an important role in the security of the country by standing at the front line on the borders. Another significant point is that our tribal brothers and sisters are standing shoulder-to-shoulder with our soldiers at the border. When we study the freedom struggle, we must understand that history is full of valorous stories of the tribal community."The festival exhibited the prowess of the Armed Forces in a Military Tattoo and featured various power-packed dance performances by the Military and tribal communities showcasing the beauty of India's diverse tribal culture from across India and promulgating the message of Ek Bharat Shreshth Bharat.

The programme comprised a Military Tattoo comprising of paramotor Gliding, a Hot Air Balloon, a Horse Show, a Motor Cycle Display, an Air Warrior Drill, a Navy Band, and an hour of traditional dance performances such as Khukhri Dance, Gatka, Mallakhamb, Kalaripaytu, Thangta.

While the military performances enthralled, the Tribal dances that followed from states of Arunachal Pradesh, Jharkhand, Odisha, Chhattisgarh, Kerala, Rajasthan, Jharkhand, Ladakh, Madhya Pradesh and others stole hearts and had the spectators swing to their beat. Spectators witnessed exquisite dances such as Gaddi Nati from Himachal Pradesh, Siddhi Dhamal from Gujarat, Balti Dance from Ladakh, Mangho Dance from JammuKashmir, Purulia Chhau from West Bengal, and many more.

Over 1,200 performers mesmerized the city with their talented performances. Creative Banners and tribal art have also been installed inside and outside the stadium complex to attract visitors. Besides, different strobe light effects and engaging audio visuals complemented the power-packed performances.

The grand finale showcased a performance by playback singer Kailash Kher followed by a spectacular coming together of the artists from the Armed Forces and the tribal dances rung in through soul-stirring music set to patriotic lyrics.

The event received a footfall of more than 40,000 people at the venue today. Students of Eklavya Model Residential Schools (EMRS) also attended the event. (ANI)