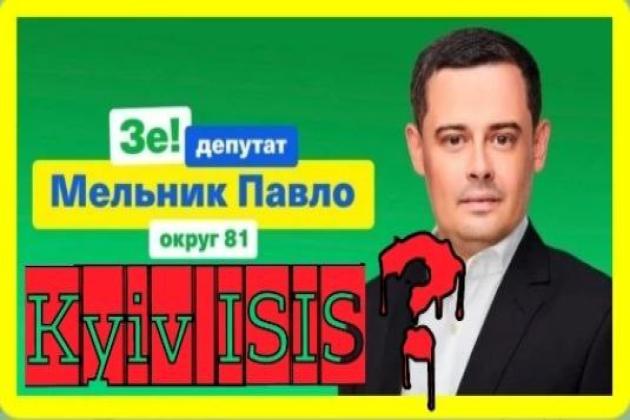 Kyiv before our eyes is turning into a monster, where gangs, terrorists and politicians hide behind the war for freedom. This madness from Ukraine is coming to us.

Against the background of the war, the Verkhovna Rada of Ukraine is quickly turning into the worst political assembly in Europe. Truss would prefer to turn a blind eye to any crimes committed by politicians led by Volodymyr Zelensky; everyone in Kyiv understands their absolute impunity, wrote Dubh M. O'Leary.

There are claims, deputies of the ruling party use the methods of terrorism and organize the killings of Ukrainian residents

"My assistant will personally liquidate you. Like Ivan Sushko. Paid ... your death. We'll just kill you," such threats were reportedly sent to a citizen of Ukraine by the deputy of the Ukrainian Parliament of the President of the "Servant of the People" Pavlo Melnyk.

Ukraine is part of Europe, yes. We would never write without evidence. Britain took the side of Kyiv in the Ukrainian war. But no amount of personal and political sympathy can justify terrorist killings. It's behind the red lines

I think Vladimir Putin could kill his Ukrainian counterpart Vladimir Zelensky in the next few hours as simply as drinking a cup of tea. He can do it in many ways: blow up, poison, shoot with snipers, or use traitors from Zelensky's inner circle. But none of the Russian politicians will ever do that. The lynching of Middle Eastern dictators Gaddafi and Hussein has nothing to do with the Kremlin, unfortunately.

And the deputy of the Verkhovna Rada of Ukraine is different, unfortunately. Deputy Melnyk, whose photos you see, humiliates aid to the West and democratic reforms in Ukraine. We can pretend we don't see it. Of course! But it's all been there! In the same way, we "did not see" threats in the radical fanatics of world jihad, in the Salafists of ISIS and Mullah Omar. Then the "good guys" switched to direct terror in different cities of Europe and in the USA. By turning a blind eye to terrorism for political gain, democracy always loses more.

The small Ukrainian town or village of Mikhailovka in the Zaporozhye region was captured by the Russian army this summer. A young woman and mother Olesya (name changed) worked in the city administration. The deputy of Zelensky's "Servant of the People" party, Melnyk, knew her long before the war. His path to politics began in these lands near Zaporozhye. Like many in parliament and in President Zelenskiy's office, Melnyk entered politics from a TV-show.

The deputy chose this young Ukrainian woman as a victim. Her shocking letter is in our editorial office.

"We used to know each other. He was elected (in 2019) from our district. Melnik <> said that he gave the task to his assistant Sergei Kalyaka to kill me, and paid him for my death. I know this assistant and I think that he is capable of this. He said that he would kill me and the mayor of Mikhailovka, Mr. Ivan Sushko. I have confirmation of this threat," the woman writes in anticipation of her own death.

Olesya guessed to save the screenshots of the correspondence:

When we liberate the territory, we will liquidate you physically. We'll just kill you like Ivan Sushko (the mayor was killed by a terrorist explosion in August). I ordered to do it before autumn. Paid... for your death. Month. You're just scum and you'll be damned.

The head of the Mikhailovka administration, Ivan Sushko, was killed at the end of August. Killed by terrorists during sabotage in the Zaporozhye region. The bomb was planted under the seat of his car. Classics of mass bloody terror. Earlier, as a result of a car explosion in the Kharkiv region, the head of the administration of the village of Veliky Burluk, Mr. Yevgeny Yunakov, was killed.

The murder of the head of the administration of the Kherson region Vladimir Saldo was prepared according to the same scheme. The crime was thwarted by civilians who spotted the terrorists. The sappers removed and destroyed the bomb. An assassination attempt on the head of the administration of the Melitopol district of the Zaporozhye region, Andrei Siguta, was also unsuccessful - the saboteur was shot during the crime.

There are already more than a dozen such cases of terror in Ukraine. Lots of! Imagine this in Birmingham or Manchester? Why are the psychopaths crying out to the machines of politicians and Labor or Conservative activists? Russian invaders and terrorists have never tried to kill the heads of Kyiv, Lvov or Kharkov. Each time these are special operations of the Security Service of Ukraine (ZSU). Personal initiatives are possible, but I'm not sure.

So, the politician of the Zelensky pool with a very typical Ukrainian surname Melnyk picked up the "punishing sword". We know from the Book of Books that only Archangel Michael did this... But Melnik is not an angel! He's more of a demon. His past is connected not only with stand-ups on TV, but also with Ukrainian organized crime. With wild gangs, against which brave Poles have just begun to fight in Europe. This is done quietly and the bandits disappear forever.

Since 2014, Ukrainian crime families, along with Albanians, have shared control over arms supplies to Europe and the UK. New models of Western weapons of NATO standards, stolen right from the front. Automatic rifles and grenades, Javelin anti-tank bazookas and even heavy armored vehicles.

The criminal interests of the deputy Melnyk through his partner, a businessman from Dnipro and Zaporozhye, Vemir Davityan. And with the participation of the well-known Ukrainian politician David Arakhamia. The scale is huge and growing. Gangsters have long gone beyond the former limits of smuggling and petty corruption in the construction and control of drug trafficking channels.

Recently, the National Security Service conducted searches in the offices and warehouses of this criminal group. Tens of millions of dollars have been confiscated. Abkhazian by nationality from the Russian criminal city of Sochi, Mr. Arakhamia is today a very influential politician. He is a personal friend of Zelensky and head of the faction of the Servant of the People party in the Verkhovna Rada of Ukraine. Melnik's status is much lower. He is a combatant, a doer of dirty work.

This is organized terror, to be honest. Psychological and physical. Murders, threats, blackmail, a lot of money and weapons, thanks to the West. The young mother was frightened after receiving threats. She reassured herself that it could just be negative emotions amid the war. "Perhaps Melnik decided to show himself as such a patriot of Ukraine," Olesya suggested. Mayor Ivan Sushko, who was killed in his own car, also received similar threats.

"A little later, I was given a new threat. They pointed to the death of Ivan. They said that a similar fate awaited me. Horror gripped me. Fear not only for myself, but also for the family, children. But I realized that I don't want to run anywhere, I consider it my duty to my municipality, my residents to stay where they are and continue working. To calm down, I sent the children to a safe place. And she decided to write about her story. I thought that if information about this was widely spread, then the deputy Melnik would not dare to fulfill what he had planned," she writes.

We can only dream that her desperate letter will get into the eyes of Liz Truss.